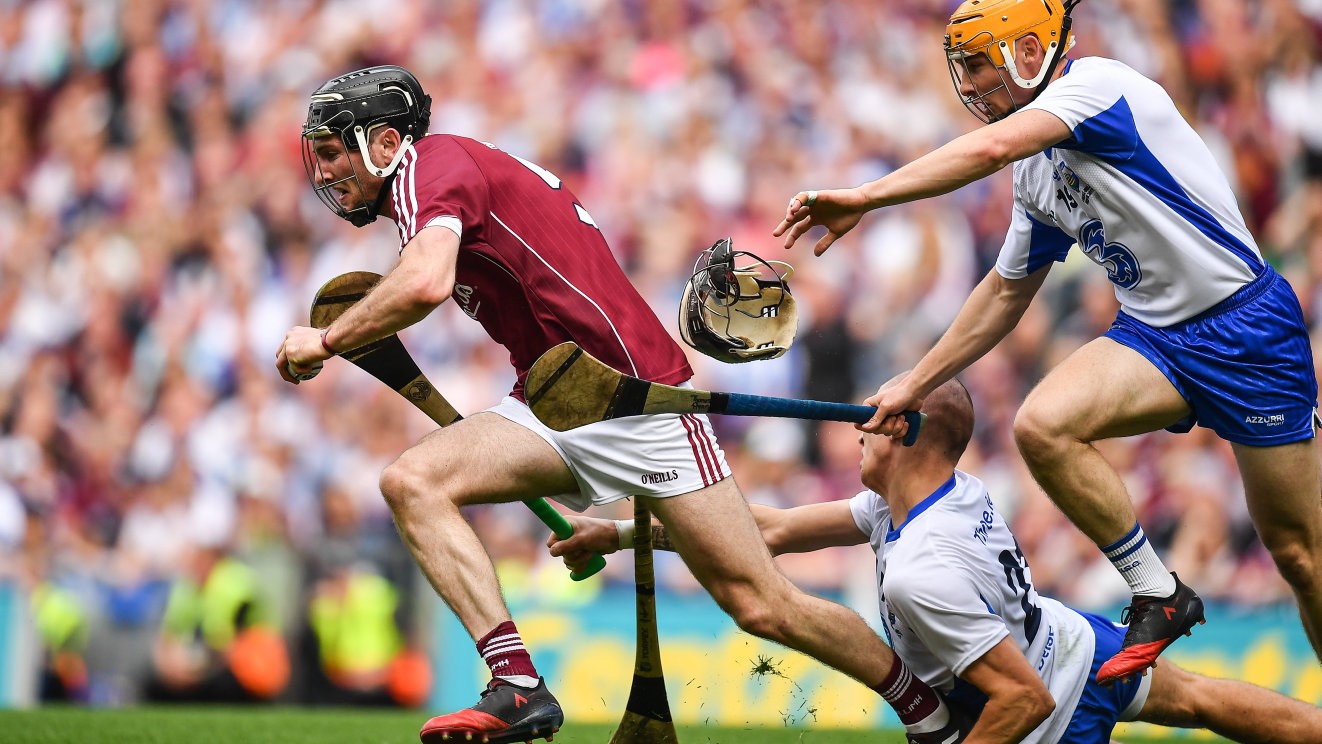 By John Harrington for gaa.ie

The enormity of what he and his team-mates had just achieved was still clearly sinking in for Galway wing-back Padraic Mannion a couple of hours after yesterday’s All-Ireland SHC Final victory over Waterford.

The final hectic few moments of the match seemed to last an age as he willed referee Fergal Horgan to blow the final whistle, and when it finally happened the realisation that he’d fulfilled a childhood ambition was a surreal one.

“I remember hoping the referee would blow it up, because I didn’t want the ball to come back down. I know how dangerous they were there with the high balls being landed in.

“I just couldn’t really believe it, and when you’re trying to register what’s after happening…it’s something you think about growing up all the time ‘I’d love to win an All-Ireland’.

“I don’t think you ever really believe you have and growing up, I’ve never seen Galway win an All-Ireland.

“It was before my time. It’s unbelievable and I’m looking forward to going back to the hotel and back to Galway, and all the people just to see what it means to the county.”

Much of the satisfaction Mannion took from the achievement was a vicarious one because it meant a lot to him to help the longer-serving players like Colm Callanan, Joe Canning, and Cyril Donnellan finally reach the promised land they’ve been striving towards for so long.

“There’s obviously particular players there that you nearly have it in the back of your mind to do it for them,” said Mannion.

“The service the have given Galway down through the years, and the criticism they have taken when they shouldn’t have been. It ticks in your mind.

“The likes of Cyril Donnellan, Colm Callanan, and Joe and David Burke, these lads that have done so much for Galway hurling and been through so much criticism. Being part of just getting them an All-Ireland medal is a great privilege and I’m delighted to be a part of it.”

Galway have been a nearly team for much of this decade until now, and Mannion believes manager Micheal Donoghue and his management team deserve huge credit for transforming them into ruthless winners.

“Yeah, it’s definitely Micheal and the team have bought into,” he said. “We have been lacking down through the years and we knew we needed to work on it and improve on it if we wanted to be successful.

“That’s what all the best teams do down through the years. Kilkenny always showed the composure. They were up against it many times. You thought they would get beaten and yet they would always grind it out.

“It’s something we worked on in training, all through the league and the Leinster championship, getting that consistency of performance day in and day out. We brought a certain amount of that, even if there is always something to work on after every game.”

They’ll seek to improve again next year and you get the feeling this group of players believes they can win a good deal more than just one All-Ireland medal.

For now, though, they’ll savour this one before worrying too much about what the future might hold.

“But obviously when the time comes – but we’ve celebrating to do before that, for this week anyway. And I think we’re well entitled to forget about next year for a while.”