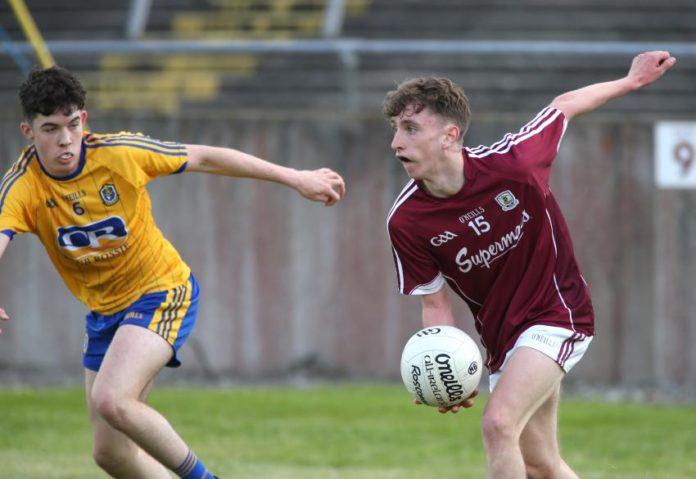 Galway and Roscommon go head to head tonight with both bidding to become the first team to win the U17 Connacht Championship after the restructuring of the underage grading system. The prize remains the same however as the winners still bring home the Kilcoyne Cup, with Galway aiming to take the trophy for the fourth successive year.

The teams have met already in the competition in the first of the four round robin games 10 weeks ago, when Galway comfortably came out on top in Tuam Stadium 4-18 to 0-8. Matthew Cooley and Aidan Halloran struck for goals in first half stoppage time with the teams level to stun Roscommon, a shock from which they  would never recover as Galway powered on in the second half to run out 22 point winners, with Cooney and Halloran adding another goal each.

Undoubtedly so it must have been a Roscommon team low on confidence who lined out against Mayo in Kiltoom in Round 2 a week later, but testament to the teak tough nature of the players and management they bounced back with a remarkable 4-12 to 0-11 victory. Shane Cunnane gave an exhibition of free taking and all round midfield play that evening, and was very ably supported by midfield partner Enda Crawley. Full forward Adam McDermott struck for a superb hat trick of goals, one better than the last, on a great night for the Rossies. In the same round Galway had no problem with Sligo in Markeivicz Park, winning 3-15 to 0-10 having struck for 2 early goals. The inside line of Gormally, Cox and Cooley again did most of the damage.

Galway’s toughest challenge came against Mayo, also in Tuam when they were put to the pin of their collar by a Mayo side scrapping for their lives in the competition. A hard fought 0-15 to 1-9 victory over their traditional rivals, with some poor May shooting in the second period costing them as the Tribesmen’s more clinical, classy forwards helped them over the line. In Round 3 and 4 Roscommon carried on their free scoring form, striking for 4-15 against Leitrim and then a massive 5-18 against Sligo to secure their Final place. Galway rounded off their campaign with a routine 4-17 to 1-11 win in Carrick-on-Shannon, a 4 minute blitz which produced three goals in the 2nd quarter putting the game to bed.

Both teams are guaranteed spots in the All Ireland Quarter Final regardless of the outcome of todays game. The winners will play Clare and the losers take on Kerry, with both games scheduled for the weekend of the 28th and 29th of July.