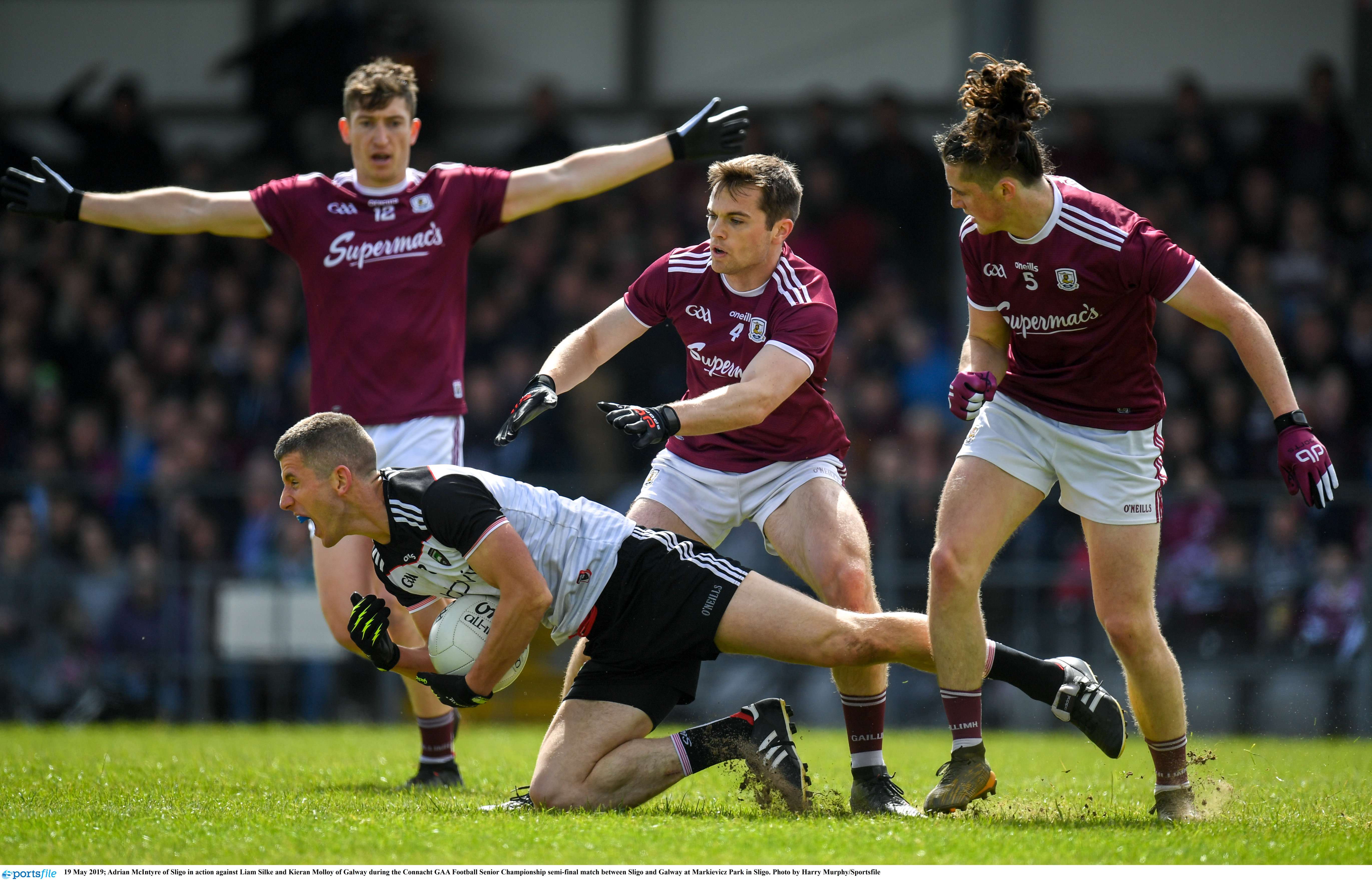 19 May 2019; Adrian McIntyre of Sligo in action against Liam Silke and Kieran Molloy of Galway during the Connacht GAA Football Senior Championship semi-final match between Sligo and Galway at Markievicz Park in Sligo. Photo by Harry Murphy/Sportsfile

A somewhat lacklustre Galway advanced to the Connacht Final on the 16th of June after a routine 3-11 to 0-7 win over Sligo in a blustery Markievicz Park today. Three second half goals from Liam Silke, Johnny Heaney and sub Martin Farragher broke Sligo’s resistance, after they put up a good fight in the first period, trailing by only two at the break.

The first half was a tight battle with space at an absolute premium. Sligo won the toss and played with the strong wind at their backs, which Galway countered by stationing a full time sweeper on the “D”. This cut off the supply of ball into the Sligo full forward line and forced them to shoot from long range, which was largely unsuccessful for them. More often than not the sweeper role was filled by Gareth Bradshaw, but Tom Flynn and Johnny Heaney also held the position at various stages. This resulted in the pace of the game being slow, with lots of over and back the line passing on both sides, patiently waiting for a gap. By the 15th minute there was more cards shown than scores, with Danny Cummins, Seán Andy Ó’Ceallaigh and Pat Hughes all in the book and the score standing at 0-1 each. A nice score by Fiontáin Ó’Curraoin on the run followed quickly by a lovely Shane Walsh strike into the breeze allowed Galway a bit of breathing space, before strong running from Gerard O’Kelly Lynch and Paul Carabine created the the space for them to slot nice scores and reduce the gap to one. Liam Silke popped up from corner back to add his second point just before the half time whistle, restoring the Tribesmens two-point advantage and making him the only player to score twice in the half.

The crowd of 5,365 expected more entertainment in the second half but they got more of the same until man of the match Liam Silke again stole forward to fist Johnny Heaneys pass into the empty net and settle the contest for Galway in the tenth minute. Heaney himself showed good strikers instinct a minute later, reacting fastest when Michael Daly’s fisted attempt at a point hit the post and lashing home with his left foot. Sligo continued to plug away to their credit, and scored three quality points on the trot through two Niall Murphy efforts with the outside of his boot and a Sean Carrabine effort reducing the gap to 6 with 15 minutes remaining. Galway were never in danger however, and sub Martin Farragher judged John Daly’s long pass best in the 33rd minute before slotting his shot low past Kilgannon for a classy goal. Farragher then added a point to leave the score 3-11 to 0-7, which it would finish up. A bad looking shoulder injury to Kieran Molloy was the only disappointment on the day for Galway, for whom Seán Andy Ó’Ceallaigh received a second yellow card in injury time.