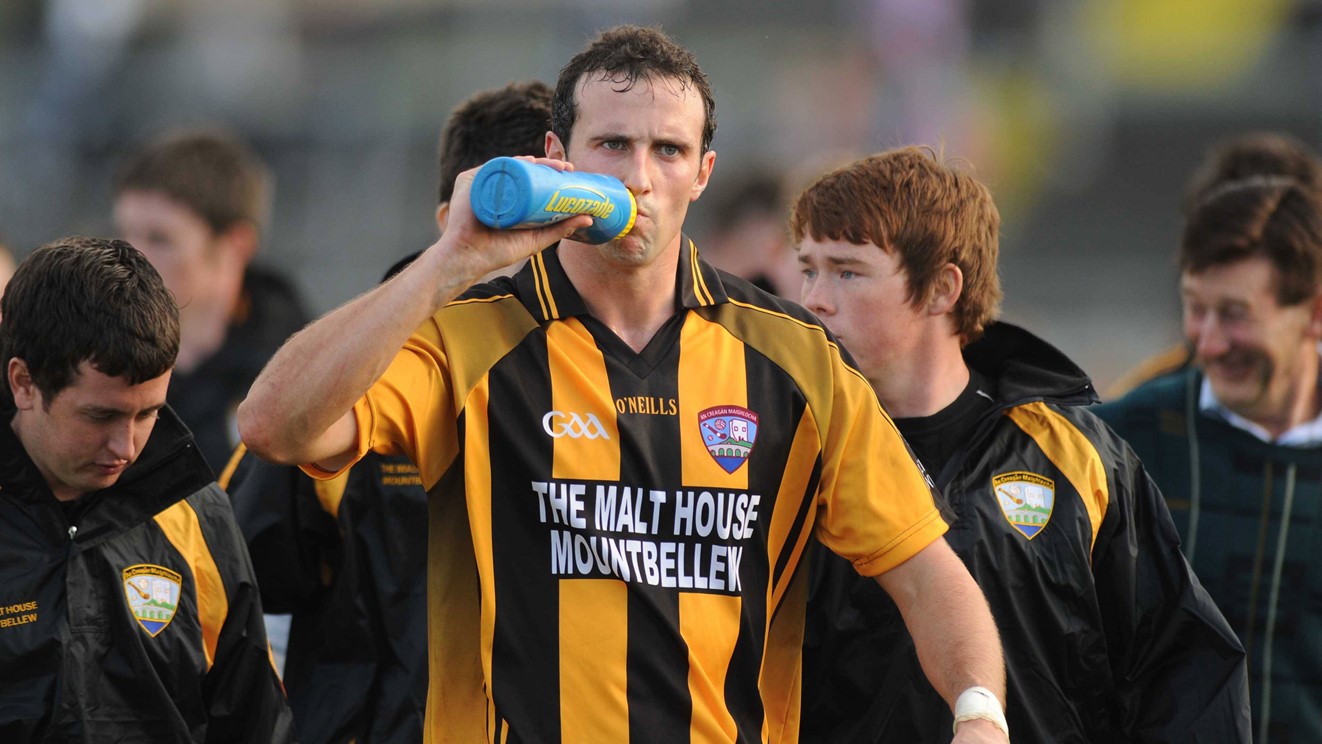 By Cian O’Connell for gaa.ie

Joe Bergin has spent two decades in the black and amber senior jersey of Mountbellew-Moylough.

In that time Bergin won an All Ireland medal with Galway in 2001 and gave distinguished service to the maroon and white cause.

Now Bergin is preparing for a County Final next Sunday against standard bearers Corofin, who defeated Mountbellew-Moylough in 2009 after a replay and again in 2015.

Significant work has been carried out in the underage ranks recently by Mountbellew-Moylough and Bergin feels that they have progressed nicely.

“This is my 20th season now so I’ve seen a few different teams,” Bergin laughs. “Practically most of the ’09 team is gone now, Derry O’Brien, Paddy Gardiner, Colm Colleran. Cathal Kenny, Joe Meehan, and myself are in the panel.

“The team in 2015 was very young, the boys were barely out of minor, it was their first taste of senior really, and they have developed on big time really.

Did Bergin always feel that this exciting and emerging crop of footballers had the potential to deliver at the highest level for Mountbellew-Moylough?

“Their footballing ability was never questioned, we were watching them come up through the underage ranks, all the success they had,” Bergin responds.

“They had bundles of talent, but the key thing and the challenge for everyone involved was evolving from underage to senior adult football. It is a lot different. It is more physical, it is more a game of attrition.

“The free flowing underage football where a lad could nearly run the length of the field and not get touched, that doesn’t happen in senior club football. That took a bit of time to get used to and in fairness to them they’ve knuckled down and worked very hard.”

Bergin is adamant that the endurance and physical work carried out during recent campaigns has been beneficial.

“Kieran Murphy with the strength and conditioning this year, Paddy Gardiner was doing it in 2015, he introduced it all to them. They have brought it through the levels, I have seen a huge change in them. Even watching the 2015 Final there a few weeks ago, looking at the young lads that day and the jerseys on them, hanging off them, today they are men, they are fully developed.

“So they have put in the yards, it took them a little while to realise that there is a big difference between underage and senior football, but they have adapted to it well. They are playing good football.”

That is true too for Bergin, who continues to produce for Mountbellew-Moylough. Enjoyment is still gleaned from sport. “I am, I found the first half of the year a little bit hard,” Bergin says.

“I came back in a little bit later, I had a chat with Mike (Mountbellew-Moylough manager Michael Donnellan) early in the year and we tried to put a plan in place that would work for him and me given the mileage I have up on the clock.

“Since the break, the run of games, I have thoroughly enjoyed it. I feel good, I feel great and fresh and fit. It is great to be going into a County Final feeling in good form, but we know that we have a huge, huge challenge ahead of us.

“It is two years since we were in one and I probably thought at the time that it was the end for me. So, yeah, it is great to be looking forward to another County Final, really looking forward to it, and hopefully we can put in a performance to get us over the line.”

That two of Galway’s key players in 2001, Bergin and Kieran Fitzgerald, line out in opposite camps adds another layer of intrigue.

“It is great, I get on great with Fitzy,” Bergin admits. “Himself and myself played on many teams together down through the years and battled against each other as well.

“He is still going great, he is still a huge leader for Corofin. His performance in the semi-final was good too. Hopefully he will do me a favour now, he is long enough playing with them and he might take it a little easier on Sunday,” Bergin jokes.

That was an era when Galway dined at the top table, but the sport has altered dramatically since then according to Bergin.

“We watched the ’01 Final last year at an event and it is completely alien to what is being played today,” Bergin states.

“That is only 16 years ago. Guys are a lot bigger physically now, but in saying that in the late noughties I thought GAA players were beginning to replicate rugby players, being very big.

“They seem to have trimmed down a bit, but are still all there. You’d love to see more of a freestyle football, a bit more freedom of expression, but for the top managers in the country it is all about results.

“It is driven by results, it is containment, defensive structures and counter attacking football. That seems to be here to stay for a while.”

Bergin has always shown a versatility and willingness to adapt to whatever role deemed necessary. A young and promising Mountbellew-Moylough outfit will derive inspiration from Bergin’s longevity. That is why he will enter Tuam Stadium on Sunday still a widely respected footballer and competitor.