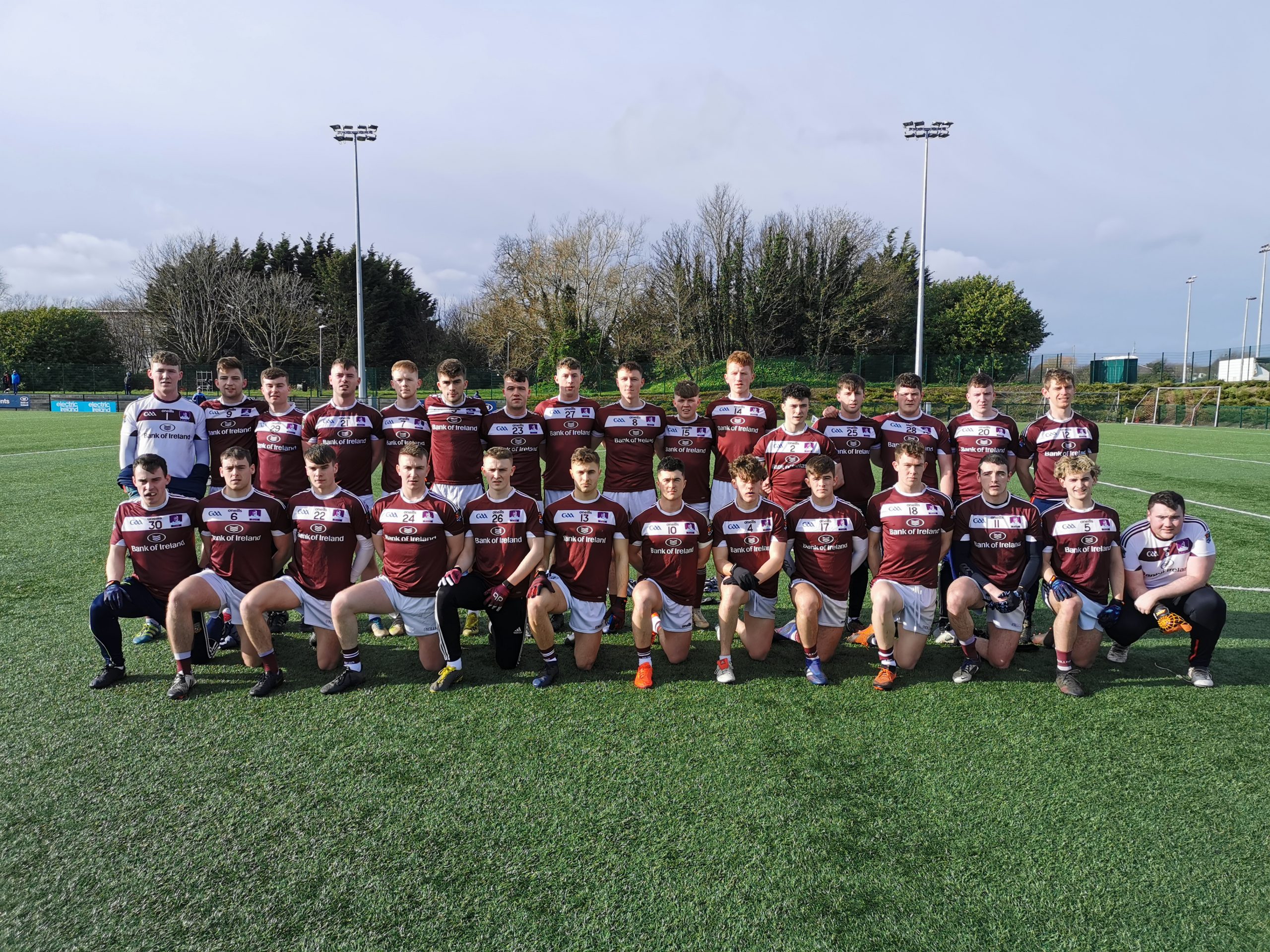 Success once again for DCU in this grade and once again NUIGalway fell short in the 2020 version. This years renewal on the 3G surface in DCU Glasnevin a brace of goals in each half and the first brace early in the game laid the foundations for this ultimately comfortable win.

In the semi finals it was a DCU Glasnevin v DCU St Pats pairing with the former edging past by the minimum whilst NUIGalway were far too strong for UCD to set up this encounter in DCU. Ironically, in the 2019 decider NUIGalway were defeated narrowly by DCU St Pats.

The strong wind that was strengthening with each minute aided the home side in the first half with David McEntee off target for DCU in the third minute. In what an open free flowing encounter both defences were on top in the opening exchanges. It took nine minutes for the games first goal and it fell to DCU full forward Billy Mannion who hit the net after two minutes of sustained pressure. The home side quickly added a wonderful score from Darragh Ryan as the western side were beginning to leak a little. NUIGalway, against the wind finally had the scoreboard in action courtesy of Conor Jameson in the 14th minute from play. It was envisaged should NUIGalway keep the score against them under half a dozen in the first half they would be in the ascendancy with hoped for accuracy in the second half. This was not achieved as the first half evolved and by the final ten minutes it was accepted that the game was slipping quickly from the Western college’s grasp.

A 70m effort from Billy Mannion bounced over the bar in 19th minute for DCU and NUIGalway were let off the hook when DCU’s Harry Ladd palmed the ball to the net but the referee adjudged that Ladd was in the square in the 21st minute. David McEntee of the famed Meath GAA clan added a pointed free in the 22nd minute as the Dublin college went five clear. Indeed, McEntee added another free in the 24th minute as DCU aided by the wind were now extracting the life force out of NUIGalway. McEntree with a hat trick of frees and Ladd once again stretched the DCU lead to nine points, (1-8) to (0-1) entering the final five minutes.

NUIGalway were in dire straits when Darragh Spillane, nephew of the Spillane clan from Kerry raced clear to send DCU (2-8) to (0-1) clear at the half time whistle.

NUIGalway needed a huge scoring spree early in the second half but it took until the fourth minute of the new half until Callum Fahey from Tulsk kicked over only the second Galway score. NUIGalway’s Evan O Brien kicked over a wonderful 45 for NUIGalway before Darragh Ryan responded with the first score from the leaders in the 36th minute and three minutes later Ryan ensured the DCU were scoring against the breeze to remain an unlucky 13 points ahead from a Galway perspective.

Without doubt the game was decided by  Darragh Spillane with his sides third goal after Paul Tolan saw his initial effort saved by James Kyne and the rebound came to the inrushing Spillane. NUIGalway then proceeded to have five minutes of dominance with 4 wides and one score before  Ross Mahon scored. NUIGalway tagged on another point but this was as good as it got for the next ten minutes as neither side got on the scoresheet with most play in the centre of the field until Gavin Durcan pointed in the 50th minute to leave NUIGalway (3-10) to (0-6) in arrears.

The icing in the cake for DCU came for Brian Diver who ventured all the way from corner back and finished a five man move for the winners to surge 16 points clear in the 53rd minute. Donal Shanley kicked over his sides seventh score. Darragh Spillane added a free in the final minutes for the winners before Conan Marren from 50m and Paddy Culhane for NUIGalway tagged on consolation scores. Best for the champions included a dominant defence that was led by Neil Matthews, Eoin Smith, PJ Masterson and Karl Lynch Bissett. Up front the winners looked to substitute Darragh Spillane, man of the match Harry Ladd, David McEntee and Darragh Ryan for the scores and they delivered. For NUIGalway they will look ahead to 2021 and perhaps third time lucky. Their stronger performers included Evan O Brien, Callum Fahey, Padraig Halpin, Gavin Durcan, Conan Marren, Alan Dignam, James Kyne and Donal Shanley.

After the game the Intermediate football cup was presented to DCU Captain David McEntee by CA committee member Jim McEvoy.