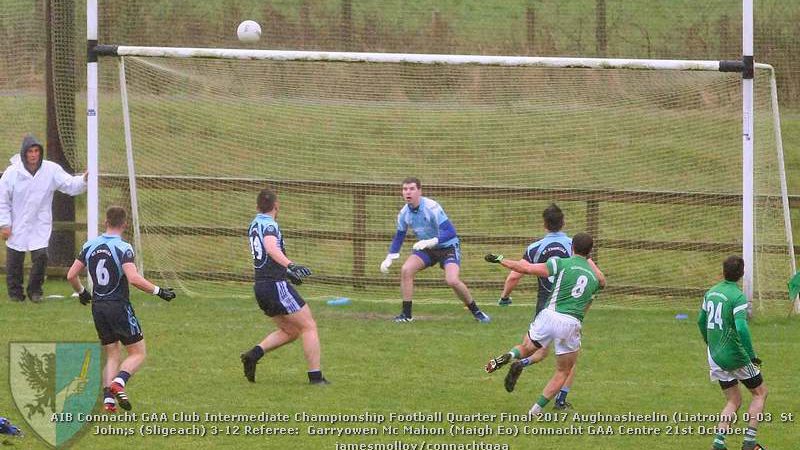 A rampant St John’s of Sligo had far too much firepower for Aughnasheelin of Leitrim in atrocious conditions in the Connacht GAA Centre on Saturday, running out convincing 3-12 to 0-3 winners and advancing to the next round of the Connacht Intermediate Championship, where they will meet the Galway champions in Markeivicz Park on the 5th of November. The dominance of the Sligo men was reflected in the half time score, when they led by 2-9 to 0-0, with full forward Alan Keane causing consternation in the Aughnasheelin defence any time the ball went in his direction, amassing a personal tally of 1-5 by the interval.

St Johns were brilliant in the first half with the aid of the gale, and their half back line of county star Charlie Harrison, classy centre back David Rooney and the industrious Oisin Cox laid the platform for their convincing victory. Midfielders Paul McNamara and James Murphy both had fine games, until Murphy blotted his copy book by getting involved in an altercation with Aughnasheelin centreback Seán McWeeney, which resulted in an early shower for both players. Up front man of the match Keane was in irresistible form, and was well supported by Brian McGowan inside, who himself kicked 3 points from play.

To the credit of the Leitrim men they battled hard in the second period when it would have been easy to throw in the towel, and had three fine Barry McWeeney frees to show for their efforts aswell as numerous attempts at goal that narrowly missed, which would have left a more favourable and perhaps fairer look about the scoreboard at the final whistle. Substitute Cathal Jordan replaced Keane with moments left and still had time to put the cherry on the cake for John’s, rifling a goal home in stoppage time after an excellent passing move.