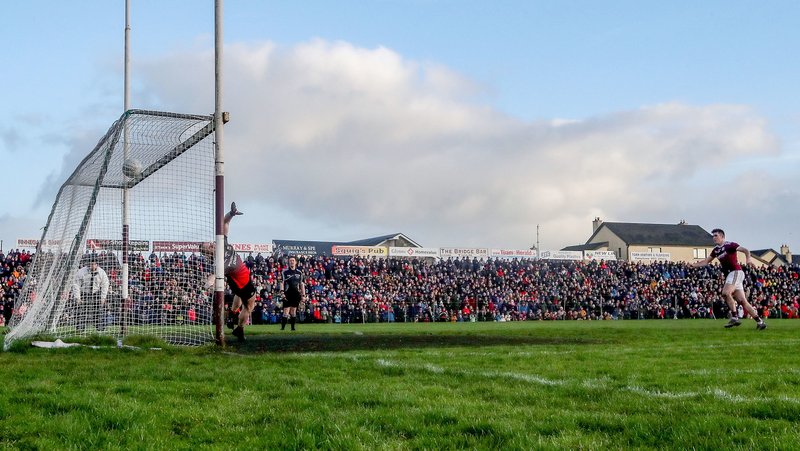 Barry McHugh goaled 4 minutes into added time to rescue this exciting FBD League Semi Final for Galway, allowing them to force the penalty shoot out which they eventually won 4-2. On the otherside however, Mayo manager James Horan will wonder how Mayo managed to lose having led relatively comfortably all the way from the 7th minute.

The first half was as tough and hard hitting as you would expect from these familiar foes. Fumbles, wides and misplaced passes galore also broke up the flow of the game causing it to be quite scrappy; it must be remembered despite the whopping crowd and unseasonably warm weather in Tuam Stadium that it is January after all! Debutant Conor Diskin opened the scoring, marking well 21 yards from goal and converting the subsequent free. Doherty and Reape then tagged on more scores, as Mayo led 0-4 nil after 15 mins, capitalising on the stiff breeze at their backs. Indeed there was a controversial moment in the 15th minute when Jason Doherty collected a booming Colm Boyle kick 25 yards out behind the defence and bore down on goal, only to be called back for a free in. As with the players, it is understandable that it will take the referees a while to fully adapt to the new rules. Frankie Burke and Donal Vaughan were both sin binned, and there were several instances of the referee calling play back when there was more than three consecutive hand passes over the curse of the game. In the 30th minute a high ball was allowed to bounce in the Galway square, which the dangerous Jason Doherty gleefully grabbed and slipped past Breathnach into the Galway net, setting up Mayo for a 1-5 to 0-3 Half Time lead. Doherty played a roving role in the first period, popping up all over the forard line and causing plenty of problems for Galway in the process.

The second half saw both teams go tit for tat as the errors continued with scores hard to come by and the majority of the points coming from frees. Barry McHugh was excellent, giving an exhibition of free taking for the Tribesmen and Brian Reape and Doherty were constant threats upfront for Mayo. Veterans Colm Boyle and Keith Higgins were among the best performers for them, defending resolutely and also providing meaningful threats on the overlap throughout. Diarmuid O’Connor was also outstanding for them, tirelessly working and involved in absolutely everything. Galway will be pleased with the impact the industrious Cillian McDaid made on his first appearance for the county senior team following his return from his brief stint in Australia in the AFL.

Michael Daly gave Galway added thrust when he was introduced, and he turned on the afterburners in the 25th minute to leave the Mayo backs in his wake before his goalbound effort somehow hit both posts and stayed out. Although they were hanging on for the final quarter, it looked as if Mayo had done enough to reach the final intil deep in stoppage time when Daly found some space before floating an inch perfect pass over the top to McHugh, who finished low and hard under Hennelly. For the second week in succession Mayo faced the prospect of penalties, with the stadium buzzing in anticipation due to the novelty factor. Diarmuid O’Connor and Andy Moran missed for Mayo, allowing Tom Flynn to slot home the winner and give Galway a real smash and grab win (Full penalty shootout can be viewed here). They now play Roscommon in a Galway venue next Sunday after the Rossies beat Sligo 2-18 to 1-16 in Dr Hyde Park in their semi final.