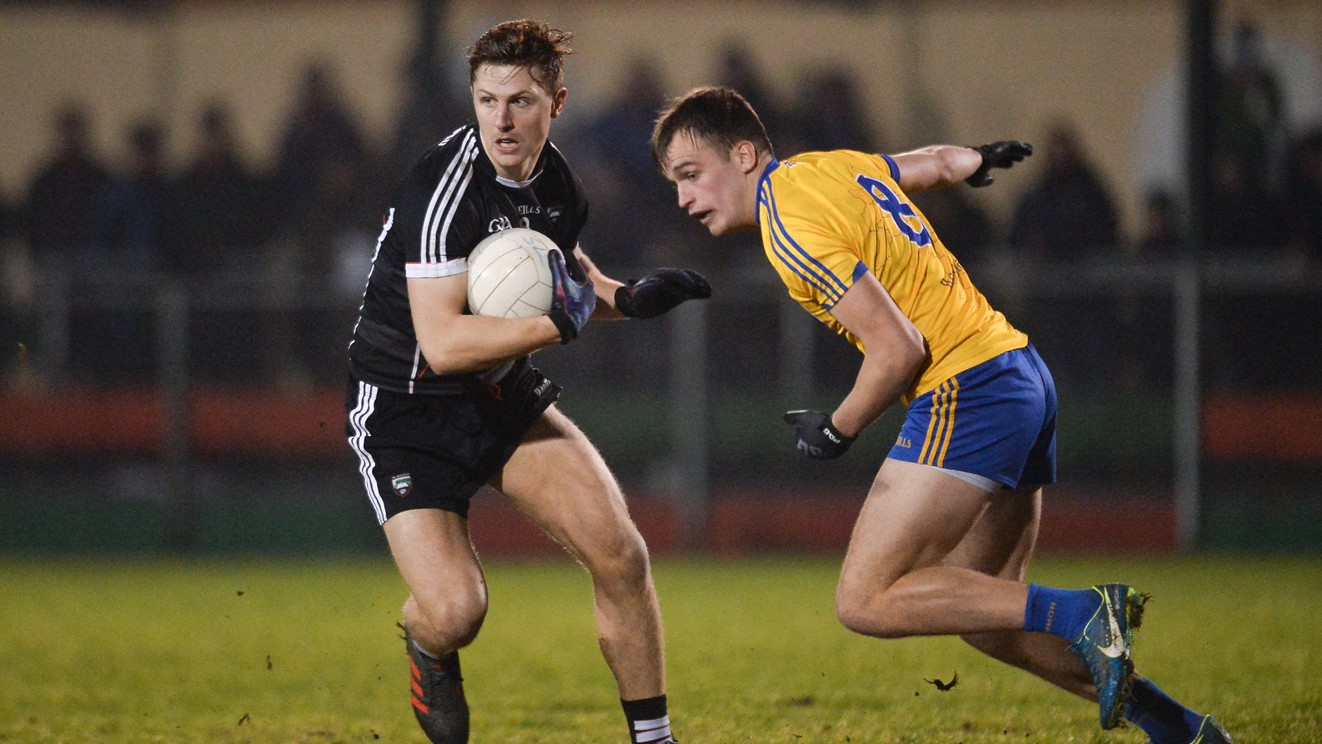 A great match played in very difficult conditions on Wednesday evening in the FBD League saw Mayo and Leitrim finish up level after a Brendan Gallagher fisted goal four minutes into injury time tied up the teams. It was a remarkable first half under the lights in MacHale Park which burst into life in the first minute, a long range Colm Moreton effort dropped into Darragh Rooney’s grateful grasp 10 yards out but Paddy O’Malley in the Mayo goal was out like lightening to block his goal bound effort. Mayo then took a stranglehold of the game, with Barry Moran prominent at midfield and Neil Douglas on the 40 picking out passes and linking the play from defence to attack very effectively. Fionn McDonagh, Ross Egan, Ciaran Treacy and Doulglas from a narrow angle all contributed nice scores in this period as Mayo led 0-8 to 0-2 on the 20-minute mark. Then Leitrim completely took over for the rest of the half, dominating midfield and attacking with intent. Brendan Gallagher lead the charge through his deadly accurate shooting, with Shane Quinn and Keith Keegan driving on well from the half back line in support. Leitrim kicked the last 6 points of the half to lead by 0-8 to 0-6 and indeed they could have been even further in front if it wasn’t for some wasteful shooting on their part in the first quarter.

A great save by Diarmuid McKiernan from an Alan Freeman penalty kept Leitrim noses in front at the beginning of the second half after the impressive James Stretton (one of nine Mayo players making their debut on the night) had been hauled down. Then however the more experienced Mayo outfit began to turn the tide and to chip away at the Leitrim lead. Inspired by the introduction of Jason Gibbons at midfield they led by three with virtually time up, defenders Aidan Butler and James McCormack amongst the second half Mayo scorers. Late drama ensued however when a speculative dropping shot into the Mayo goalmouth saw Brendan Gallagher in the right place at the right time to fist to the net with time almost up. It was the least Leitrim deserved after a great gutsy display, and they will be delighted with this result and hope to build on it for the rest of the FBD League and into the Allianz League.

Roscommon ran out easy victors in Kiltoom against a Sligo team that put in a strong first half performance only to fade away in the second half.

In a free scoring first half, where both sets of forwards gave the oppositions defence a torrid time, a young Sligo team showed they had plenty of forward ability with Keelan Cawley, Stephen Coen, Nathan Mullen and Adrian Marren showing well on the scoreboard. The first half was played at a lightening quick pace for the time of year with some excellent periods of support play from both sides. This was best demonstrated as half backs from both sides getting on the scoresheet.  However, three Roscommon first half goals, 2 from Boyle’s Cian McKeon and a Diarmuid Murtagh effort where he capitalised on a mix up in the Sligo defence saw the Rossies go in 3-8 to 0-8 up at the half time whistle.

With both teams playing an exciting brand of open attacking football hopes were high for a similar standard in the second half, however a raft of changes at half time from Roscommon proved the springboard for them to further extend their lead while the Sligo players legs seemed to wane. The introduction of Finbar Cregg, Donie Smith and David Murray further strengthened Roscommon’s attacking options, with the busy Cregg in particular scoring a beautiful point from an acute angle late on.

As the second half progressed Sligo couldn’t find any respite from the seemingly relentless Roscommon attacks, with the Murtagh’s Ciaran and Diarmuid proving particularly effective. To Sligo’s credit they continued to battle, with Sean Carrabine and midfielder Darragh Cummins standing out as two of their better performers. The introduction of Pat Hughes at full forward gave Sligo a focal point and indeed it was Hughes’ ball winning ability that set up Adrian Marren to score a delightful lobbed goal late on. This was followed a minute later by a rocket of a finish to the top corner from Kyle Cawley. However, these late goals only proved to provide a gloss to the scoreline as Roscommon ran out deserved winners on a score line of 3-19 to 2-10.