A coaching committee is formed in clubs with the aim to review coaching practices within the club in order to improve performance, with the objective of maximizing the potential of success of all competitive football and hurling teams. Coaching Officer should chair such committee and be made up of:

The committee provides support to all coaches, for the successful implementation of the club coaching plan, on an ongoing basis and should hold a presentation for all existing and potential coaches outlining its contents.

After the implementation of the plan it should be monitored at regular coaching committee meetings, where at least one coach from each grade should attend to brief the committee of progress. 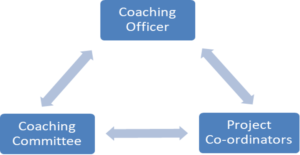 The coaching structure of the club is a dynamic interaction between the club coaching committee, the club coaching officer and the project coordinators in the club. Appointments for each role and the responsibility of that role should be clearly outlined. The members of the committee and the number of projects may vary from club to club, and some roles may overlap, however, it is highly recommended that the above structure is followed as outlined by Connacht GAA