The starting point for every Coach of teams is to develop a thorough understanding of the Principles of Team Play. Essentially, there are two phases to most team games.

Firstly, the principles of attacking play in modern Gaelic football as presently understood are –

Players move into wide positions to draw defenders away from each other and from central positions, thereby creating 1 v 1 opportunities and giving more space inside for forwards to exploit.

Moving the ball through or into the oppositions defence, recognizing when to do so at speed, and when to be patient awaiting the opening.

The movement of players in from or behind the ball, therefore moving defensive players out of position and causing disruption in their defence.

Players making runs to create space for either themselves or others, and recognizing the difference. Movement of players in opposite and rotational movement patterns.

Supporting players giving verbal and non-verbal signals to the players in possession and to other players. 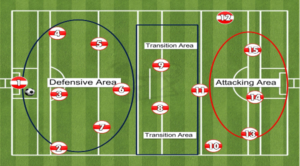 Too often defenders commit or lunge into the tackle, without knowing what is going on behind them. A good defender will strive to get close enough to the attacker, to prevent a score being taken, but not too close to allow the forward to dummy or side step him. The defender must always keep in mind that the forward has to hop it solo it – get rid of it, and the key principle of defence must be to make the forward make the decision. Good defending is all about waiting for the right moment to make the tackle, or force the forward on the ball into a potentially low scoring area of the pitch i.e. outside the scoring zone.

Deny your opponent possession by getting to the ball first.

Often defenders see their primary duty as dispossessing their opponent, sometimes resulting in a free kick being awarded, whereas the key initial function of good defence is to DELAY, and prevent the forward from doing what he wishes to do. Also giving time for your defence to recover into correct defensive position.

In the event that the forward gains possession, the role of the defender is to pressurise the attacker into making a mistake by:

N.B: Central to good defensive work is competence with the tackle. The timing and technique is key, including body position when jockeying and then tackling.

Balance as a principle of play in defence is essential. With forwards being mobile, moving defenders around the pitch and attempting to pull them out of position. It is essential that the defence maintains balance through depth and cover. Defenders have to be coached to ‘read’ the game while at the same time working on their ‘man marking’ skills. Maintaining balance in defence is also about good Communication, Vision and Decision Making by the defender.

For effective defending, high levels of concentration are essential. Concentration is central to getting players behind the ball and into the key defensive area to provide cover and depth.Players must recognise the correct defensive position individually and collectively.

The defender’s first preference should always be to win the ball in front of his opponent.

Transition of play is the ability of the player/s to switch from defence into attack or vice versa from attack back to defence.

On dispossessing your opponent, the switch of mindset from defence where you have worked really hard to win the ball back into one of attack where you have to move the ball into the best position for your team to get reward for your turnover is extremely important. The quicker you transition the better chance your team has of scoring. Players and teams that carry out this effectively can get a large number of scores from turnovers.

On losing possession to an opposing team the switch of mindset from attack back into defence is an area some players struggle with in teams. The ability to transition the mindset back into defensive mode quickly allows a much higher chance for the player to win back possession quickly. Players and teams that are competent in this transition prevent a lot of scores from turnovers. 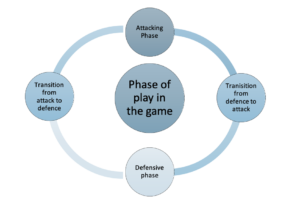