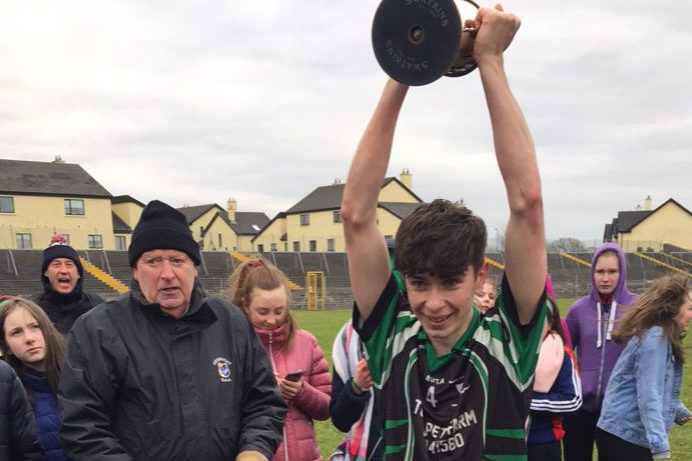 St Cuan’s Castleblakeney lead from pillar to post as they saw off a dramatic second half comeback from Scoil Chuimsitheach Chiaráin to secure the Connacht GAA Post Primary Schools Senior D Fottball Championship in a bitterly cold Tuam Stadium on Monday. Having played with the aid of the strong breeze, Cuan’s led 1-6 to 0-3 at the half time whistle, despite the men from Ceathrú Rua having enjoyed most of the play. A bullet of a goal by full forward Shaun Keane in that first period was the most notable moment of the half, with Odhran Loughrey also landing some nice scores for Cuan’s. Scoil Chuimsitheach Chiaráin roared back into the contest after the break and trailed by just a point with a minute to go until an excellent Darragh Glynn free into the wind gave St Cuan’s a bit of breathing space, which they maintained until the final whistle. The Scoil Chuimsitheach Chiaráin comeback was led by centre froward Oisín McDonnacha and his deadly accurate free taking alongside Éanna MacCormack in the half forward line, who’s tenacious tackling and tireless running caught the eye. Man of the match was St Cuan’s centre back Jack Hughes who stood firm against the Scoil Chuimsitheach Chiaráin second half onslaught and helped repel several dangerous attacks, as did Dean Reilly alongside him. Credit must go to both teams for such an exciting, hard fought game as conditions were difficult and in the end St Cuan’s were just about deserving winners.