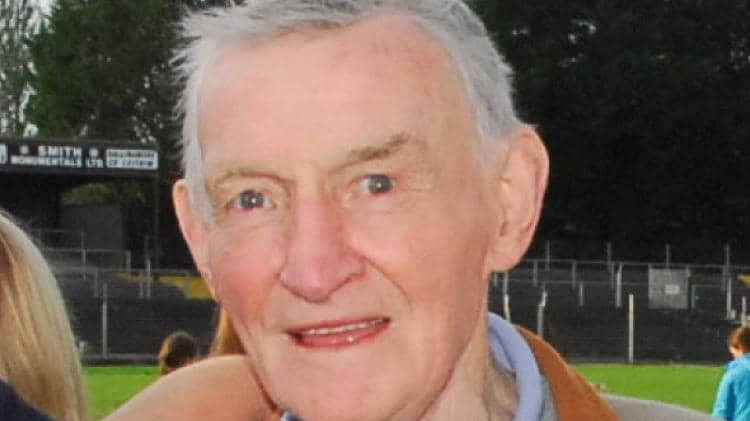 On Monday the 5th of April I was out walking our Red Setter Dog and I started thinking of the great Gaelic players of the past.   As a young child I used to hear Michael O’Hehir talking about a particular Packie McGarty of Leitrim.  Little did I know that the great Packie would go to his eternal resting place the next day, RIP.

70 years ago, we had no television we only had the radio, ‘the wireless’ as it was called then. Listening to Michael O’Hehir talking about those great players left a wonderful and lasting impression on me. The description Michael gave of those mighty men created a picture in my mind of what those great icons would look like. In reference to Packie McGarty, Michael O’Hehir use to say “Packie often kept Sean Purcell of Galway off the 40-yard mark position on the Connacht Railway Cup Team”. Sean would play then at full forward.

I am often in the home of Leitrim football Pairc Sean McDiarmid Carrick on Shannon and I see all the photographs of all the great players of Leitrim. When I see the photo of Packie McGarty I remember how fantastic a player he was in the forwards. Pakie was a true legend, he held a standard in his position equal to Iggy Jones of his time and mirrored by Peter Canavan of Tyrone some 40 years later.

Where did all the greats like Packie McGarty come from? When you compare the standards of coaching today, where there is a huge investment in time, finances, professional skills and knowledge in county teams, I often wonder how did all those great players excelled in the past. No doubt, the key to their success was all the time they spent from childhood to adulthood having a Football or Hurley in their hands. This is shown to us in the past through players like Packie, Nace O’Dowd of Sligo, John Morley of Mayo, Dermot Earley of Roscommon, Sean Purcell of Galway Football & Joe Sammon of Galway Hurling, to mention but a few.

I would like to acknowledge that the game was a way of life for these players. Their life and the lives of their families revolved around it. With that, I would like to pay a tribute to Packie and his family with the recitation – ‘The Beautiful Game’.

Less than a minute remains on the clock,
As I tighten my lace and turn down my sock.
One last chance, and it’s ALL down to me,
It must be a goal, for we need all three.

I step up to the ball and look towards the posts.
Is that the crowd I hear, or is it the ghosts
Of men who before me who have faced the same test,
And never once failed to give it their best.

My father he gave me the love of it all,
When he guided my arms to strike that first ball.
A Hurley a football, it’s the same thing to me.
It’s playing the game that matters you see.

From boys in a field to a big crowd roar,
There’s never been anything to excite me more.
From the day i could run to the day I can’t walk,
And even then – the game I’ll still talk.

The few steps to the ball now seem like a mile,
But a well placed shot and I’ll be carried in style
On shoulders of team mates expressing their joy,
It’s a dream that’s consumed me since I was a boy.

My feet pound the ground, as my foot strikes the ball,
It sails through the air over men who are tall.
Then dipping and curling, it finds the goal,
And just for a moment I’m in touch with my soul.

A whistle blows hard and I awake from my dream.
I’m watching my own son play for the team,
And maybe one day they’ll announce HIS name
As he steps out to play – the beautiful game.

I offer my own deepest sympathies and that of the Connacht Council to Packie’s wife Ellen, their children and their families at this sad time.  Ar dheis Dé go raibh a anam dílis.