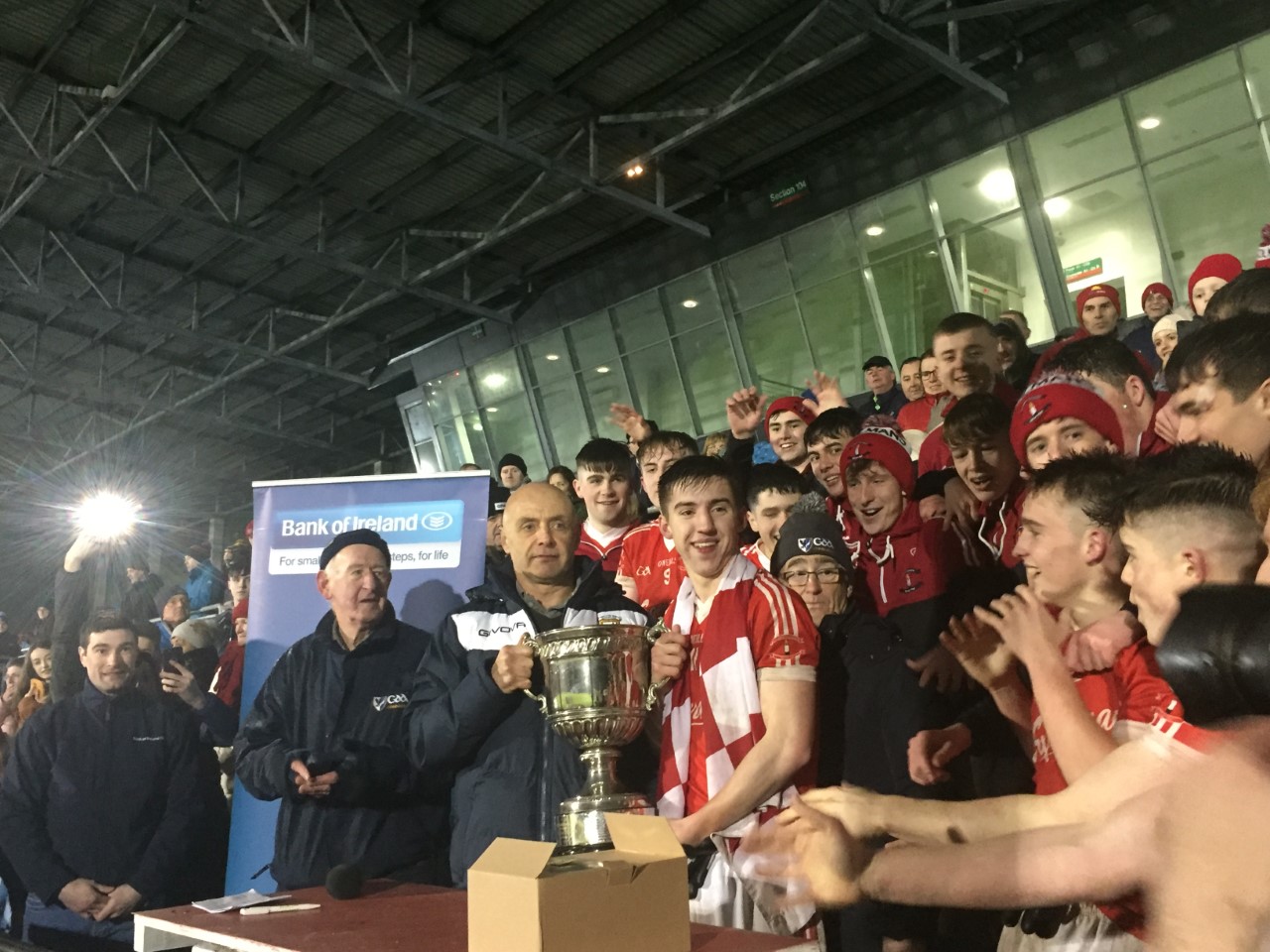 St Colman’s just inched past rivals St Gerald’s to clinch the Connacht Colleges Senior A Final tonight in a cracking game in a sodden MacHale Park. The Claremorris school hung on at the finish to avenge their League Final defeat to the Castlebar outfit and just about deserved their 6th title after a tremendous contest in MacHale Park.

It was a typical Connacht Colleges Schools Final, with students from both schools banging drums and chanting creating an electric atmosphere and bringing great colour to the occasion throughout. Both teams started off quite nervously, understandable considering the magnitude of the day and the prize at stake. Colman’s settled fastest and led three points to nil after 10 minutes, with James Jennings, Niall Treacy and Matt Saunders all landing class points from a variety of angles. Lazy tackling from St Colman’s was to let St Gerald’s back into the game however, with captain Ronan Reilly and Ultan Reilly in deadly accurate form, notching 6 out of 6 with their first half frees.

Gerald’s got on top around the 15th minute mark and just as the St Colman’s Ultras behind the goals lit their first flare, the Castlebar school cut through the middle of their defence with some slick interplay between Jack McLoughlin and Paddy Heneghan allowing Ciaran Mylett all the time in the world to palm to the empty net. This put Gerald’s 1-5 to 0-5 in front which they would have been delighted with considering their slow start to the contest. Colman’s struck back with midfield colossus Cillian Golding’s monster point under pressure coming just at the right time to keep them in the game. Indeed Golding’s spectacular fielding throughout in the middle of the field was one of the highlights of the game. Sharp shooter James Jennings then took over, curling over a number of quality points with his sweet left foot, 0-5 in total in the first half. Attacking wing back Ethan Henry also smacked over a huge point from long distance in this period, drawing St Colman’s level. After a cracking first half then there was no separating the teams, 0-10 to 1-7 at the long whistle with both teams grateful for a breather.

Colman’s meant business at the start of the second half but couldn’t convert their territorial dominance to the scoreboard. Man of the match Ethan Henry slotted a booming free ten minutes into the second half to get them going and they never looked back, leading all the way to the finish when Henry himself kicked the crucial final score, his 4th of the game from wing back. Golding and Keane also managed to get a stranglehold on the middle of the field in the second half and this set the platform for victory, with the tenacious tackling of the entire team gaining a turnovers at crucial times for the school. Gerald’s fought tooth and nail to the death and were never out of contention, with Aaron McHale impressing at wing back and when Paddy Heneghan swivelled in the 25th minute to slot over and put one between the teams, extra time looked on the cards. Colman’s however through pure grit and determination were able to see the game out and set up and All Ireland Semi Final against the Ulster winners on the 27th of March. Captain Enda Hession lifted the Aonghus Murphy Cup to a rapturous reception from the Claremorris supporters as the rain teemed down in Castlebar after a game as exciting and enthralling as any that will be played over this bumper weekend of GAA action.