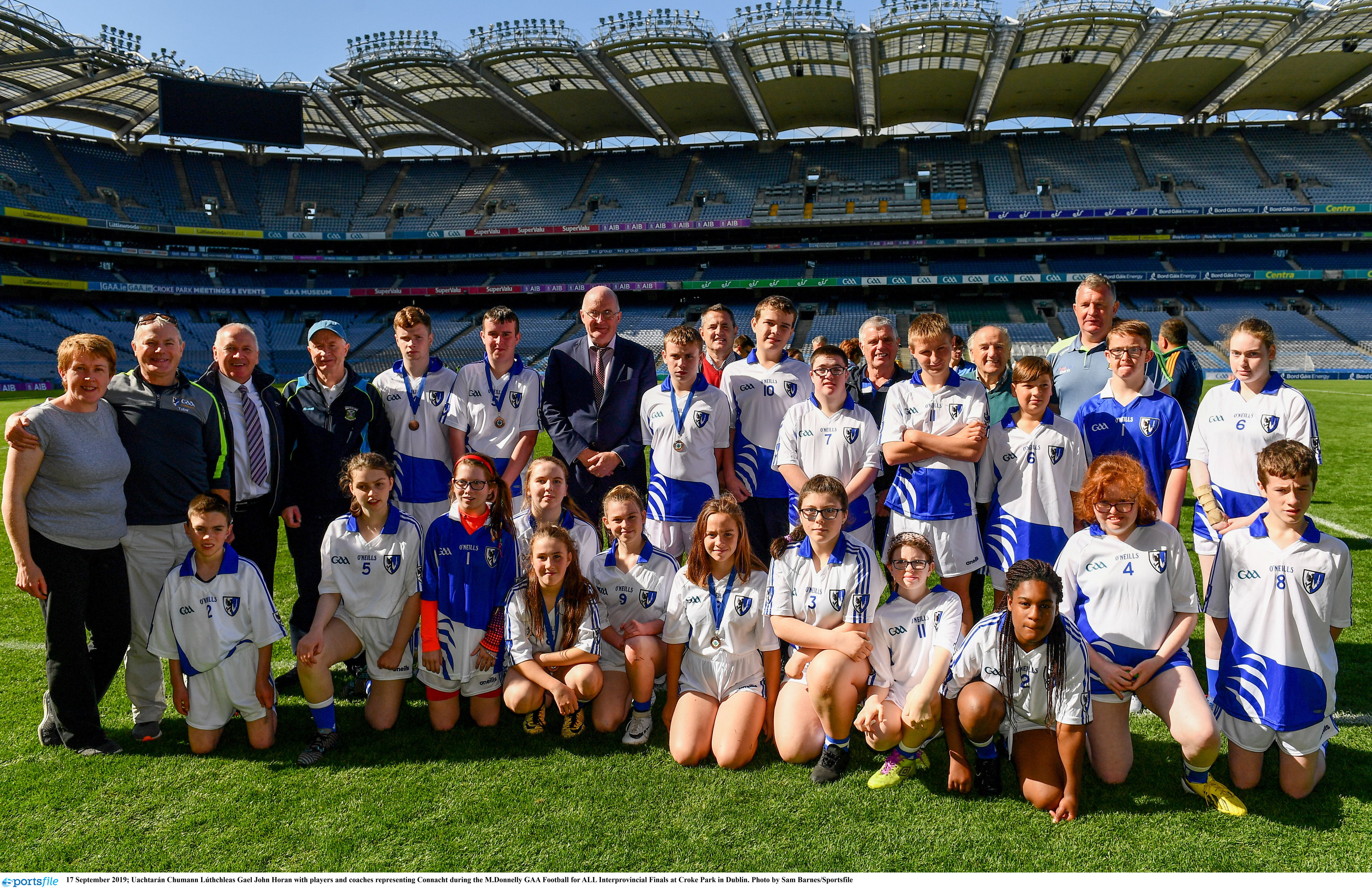 Ballytivnan Sligo were part of the Connacht teams ( boys & girls) who played in the Martin Donnelly GAA ‘’Football for All’’ Interprovincial Finals with players (boys and girls) from St Anthonys School Castlebar, St Dympnas Ballina, St Bernadettes Letterkenny, Lakeview Galway. It is a great honour for any sports person to wear the colours of their Province and for each of them and their families, this is a proud occasion.

The Connacht boys team played North Leinster in their first game and put in a tremendous performance before losing to their superior forward play. Next game was against Ulster where they competed bravely and passionately and were narrowly beaten. They qualified for the Shield final where they competed against South Leinster. This was a nail-biting contest where both teams competed bravely and scored some marvellous long range points, and the teams were level on a number of occasions. However the overall strength and team work of South Leinster ensured they were ahead at the final whistle.

The Connacht girls team played South Leinster in a titanic struggle before having to yield to the overall strength and skill of the opposition forwards and lost narrowly. Next game was against North Leinster and they tried valiantly with great defensive work, and some superb scores but came up a little short on the scoreboard at the final whistle. The third game was against Munster and the Connacht team played with grit and determination and could not get ahead and lost out narrowly. The Connacht Girls qualified for the Shield final against South Leinster and this game went down to the wire before South Leinster went ahead and won the Shield.

The girls and boys savoured their time in the sun drenched Croke Park and made new friends with players from Connacht and the other Provinces. The GAA President John Horan was present to meet and greet all the players, mentors and supporters, and complimented all who helped out, for their time, enthusiasm and passion. This is truly an inclusive and a ‘’reaching out’’ to people of any ability to play Gaelic football, share the same thrill, and play the same game. The joy, excitement of all players and helpers was very evident and an acknowledgement that this event will only grow from strength to strength, and having the finals in one of the finest stadiums in Europe enhances the overall experience.

Special thanks to the National GAA Games for All organisers Brian Armitage, Tony Watene and Richie Doran from ISSSC ( Irish Special Schools Sports Council). Also thanks to the School Principals and teachers who have taken this great game on board as part of their sporting calendar, and have supported and encouraged the pupils to play: Roisin O Flaherty St Anthonys Castlebar, Declan Brady St Dympnas Ballina, Terry Shiels St Bernadettes Letterkenny, Dave Audley, Lakeview Galway, and Carmel Wynne St Josephs Sligo. Thanks to the coaches who helped out on the two coaching preparation days and also in Croke Park – Liam Og Gormley, Padraig Clancy, Gerry Tuohy, Tim Hynes, and Pat Stenson from Sligo and Eoin Sweeney, Martin Costello and Billy Mc Nicholas from Mayo. Thanks to the parents and siblings who encouraged and cheered on the players in Croke Park. Special thanks to Connacht GAA Games for All chairperson Mattie Kilroy and Secretary Denis O’Boyle who spared no effort in ensuring the Connacht team were looked after in every way possible. Also thanks to the Connacht Council for supporting these games and Gerry Mc Govern President and John Prenty Secretary.

Tim Hynes. ( Chairman of Sligo GAA Games for All committee.)