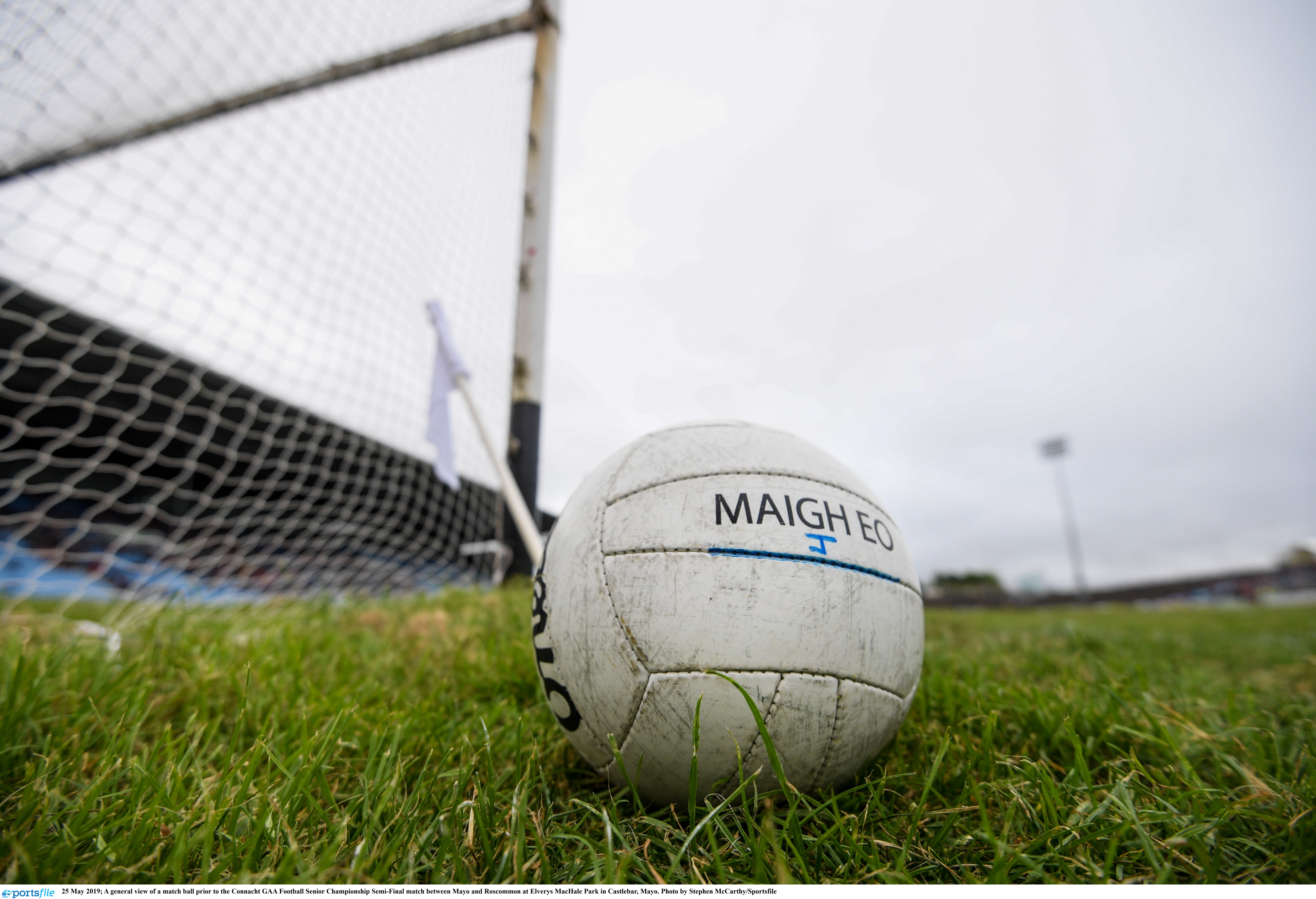 In the midst of storm Ciara, Galway defeated Mayo 3-2 on penalties after an enthralling battle in Castlebar in the Connacht U20 Preliminary Round today. The teams could not be separated in normal time or extra time, with man of the match Paul Towey landing 9 points for Mayo in a game loaded with drama from the throw in. Galway now will travel to Carrick on Shannon next Saturday bidding to reach the Connacht Final the following weekend.

Mayo played with the gale at their backs kicking into the town goals for the first thirty minutes and got up and running quickly through a stylish score from centre forward Frank Irwin in the first minute. This was followed by a period of intense Mayo dominance as they pinned the Tribesmen into their own half, however they were unable to get to grips with the howling wind at their backs as they overhit many of their passes and took some wild shots. Nathan Grainger equalised on Galway’s first meaningful foray upfield, converting well in a tight space after being well set up by the pirouetting Jack Glynn. The outstanding Paul Towey then got in on the act, kicking the first of his nine points off the outside of his right from the right wing before quickly following it up with another long ranger a minute later to make it 0-3 0-1 after 15 minutes. Paddy Goldrick who had a solid game for Mayo throughout kicked another quality long range point shortly after to extend the Mayo lead to three. Conditions were woeful but to both teams’ credit their commitment couldn’t be faulted with every ball ferociously contested and no quarter given. Mayo pressed right up on Conor Flaherty’s kickout and boxed the ball back towards their goal at every opportunity which piled the pressure on the Galway rear-guard, who wouldn’t have been too unhappy going in 6 down (0-8 0-2) at the half time whistle considering the conditions. Paul Kelly and Conor Raftery in particular battled hard for Galway in the middle sector and won some good primary possession but they found it very difficult to feed their dangerous forwards like Matthew Tierney and Tomo Culhane with anything like decent service. Tony Gill scored a brilliant breakaway point coming up to the half time whistle for Galway’s second score before two class late Towey points gave the home-side the two goal lead at the break.

It was always going to be a case of whether Mayo could cling on in the second half and they very nearly did, leading right up until Cathal Sweeneys brilliant equaliser in the 62nd minute which rescued the game for Galway. Galway won the second half 0-8 0-2, the same as Mayo’s first half advantage to deadlock the teams 0-10 each. Tony Gill did more than anyone to force the draw, driving his team on in the rain from number 6 and landing 3 fine points to boot. Sub Ryan Monahan’s point and two Matthew Tierney frees were also key moments in the second half. Enda Hession and David McBrien had good second periods for Mayo, particularly in giving goalkeeper Jamie McNicholas options for short kickouts which helped relieve the pressure they faced against the elements. It looked like the two hard won second half points laid on by sub Kuba Callaghan for Paul Towey would be enough to see Mayo home but Galway stuck at it and levelled at the death after a pulsating game which neither team deserved to lose, with Aaron McDonnells late attempt for a winner for Mayo dropping agonisingly short to force extra time.

Galway played with the wind in the first half of extra time but it was Mayo through Towey who nudged ahead, converting his seventh point of the game from a close in free after Ciaran Gavin was pushed over. Then Paul Kelly brilliantly worked the opportunity for Matthew Tierney to bury what looked like the crucial goal in the ninth minute, giving the Tribesmen a three point buffer. Importantly however Ciaran Gavin won and converted a free in the closing stages to leave the gap at two at half time, 1-11 to 0-12. Now it was Galway’s turn to hang on and they too were unable, Mayo showing fantastic grit to claw the game back once more. Paul Towey landed two more points in the second half to draw the game and bring it to penalties, the equaliser coming from a monster effort from the left touchline by the ’45.

There was no let up in the drama in the penalty shoot out as the rain continued to teem down, with Pat Lambert striking the post and Kuba Callaghan blazing over for Mayo and Matthew Tierney, Tony Gill and Ryan Monahan converting for Galway to give them the advantage in the early exchanges. Adam Barrett and Aaron McDonnell held their nerve to convert for Mayo before MacDara Geraghty missed and Goalkeeper Conor Flaherty also kicked wide when a goal would have won it for Galway. Flaherty made up for it immediately after however, saving from Oisin Mullin to decide it for Galway 3-2 after a very memorable contest.