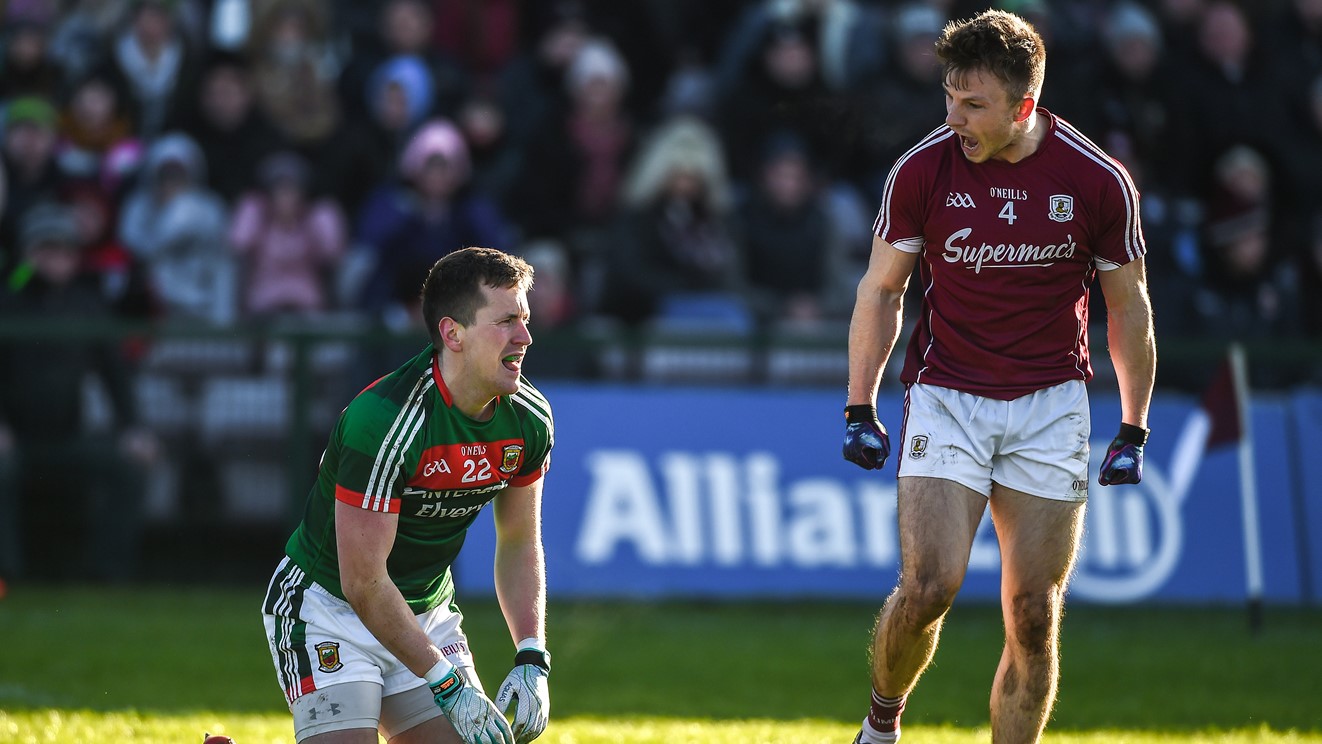 By John Harrington for gaa.ie

Galway footballer Eoghan Kerin says the Tribesmen’s upward curve in recent years has introduced a ‘bit of needle’ into rivalry with Mayo.

They’ve now beaten their neighbours in the last four competitive matches they played – this year’s Allianz and FBD league matches and their 2017 and 2016 championship clashes – to tilt back a balance of power that had previously been weighted in Mayo’s favour.

The League match the two teams contested two Sundays ago was an ill-tempered one – Kerin himself feeling the brunt of two tackles that saw the O’Connor brothers Cillian and Diarmuid red-carded within a few minutes of each other.

But the corner-back isn’t bothered by the renewed needle between the two counties because to him it proves that Galway are doing something right if they’re frustrating a Mayo team that was so dominant in the province for so long.

“We’ve played them twice and beaten them twice so far this year and there’s been a tiny bit of needle in both of them, but, look, you expect that in a Mayo-Galway clash,” he told GAA.ie.

“The last three or four meetings we’ve got the better of them, but they’re all been tight, tough encounters. I suppose from a Galway perspective, prior to the last couple of years we weren’t overly performing well.

“That was reflective of Mayo stepping it up a gear in Connacht and bringing it to a new level. It was up to ourselves and the Roscommons to get up to that level and start competing.

“We’ve been fortunate enough in the last couple of years that we’ve got the better of them. Hopefully that trend continues.”

Galway have always used Mayo as the first yard-stick by which to measure themselves, and vice versa, but perhaps they’ve been too focused on besting their neighbours.

They played with admirable intensity when beating Mayo in the 2017 and 2016 Connacht Championships, but flattered to deceive thereafter.

That’s why their start to this year’s Allianz Football League campaign has been so impressive – they’ve played with the sort of consistency that has previously eluded them.

Many tipped them to struggle on their return to Division One, but instead they’ve beaten Tyrone, Donegal, and Mayo and in all three matches complemented their undoubted skill with a real stomach for battle.

“Yeah, one thing that’s been missing in our game the last two or three years is consistency,” said Kerin.

“We’ve been able to have one really big performance, but then maybe the following day we haven’t been able to follow it up.

“Even last year, a great performance against Mayo in Pearse Stadium, and then we followed it up with a, pretty much, let’s call it what it was, a drubbing to Roscommon in our own back yard.

“It wasn’t very nice and will live long in the memory. It wasn’t a nice experience.

“Similarly, the following week we went out and put in a really good performance against Donegal and then we let ourselves down when we played Kerry in Croke Park.

“We were very disappointed coming away from that one because we thought we were in with a good chance in that game but just didn’t perform to the level we were capable of.

“We have to take learnings from that and put them into practice this year and build on our consistency because that’s what’s been missing.

You can tell by the way he talks that he and the rest of the Galway panel are full of confidence and enjoying every minute of playing Division One football.

They’ve discovered that they’re not as far behind the elite teams as maybe they once thought they were, and that knowledge has emboldened them.

“Yeah, it comes back to that learning curve,” said Kerin. “You’d see these guys getting their air-time on the TVs on the Saturdays and Sundays and Division Two and Three don’t get that sort of exposure.

“When you’re in the midst of it all it’s nice to put yourself up against what is the cream of the crop. These are the best footballers in the country and we’re pitting ourselves against them and over the last few weeks we’ve gotten the better of them.

“We don’t focus on the results, but if we put in a good performance we know we’ll be there or thereabouts at the end of the game so that’s what we focus on.

“A lot of it is confidence. You have to be confident you’re able to get the better of the lad on any given day. That’s the way you take it.

“And it is a help when you’re marking the likes of Shane Walsh and Damien Comer and all of these guys in training. That does prepare you for that kind of level because they’re serious operators.

“I haven’t seen anyone run like Shane Walsh, so if I can try and track him as best as I can then it might make it seem easier to track down those other guys.”

As much as they’re enjoying the journey through this League campaign thus far, Kerin knows the most important milestone in the mid-distance is their Connacht Championship clash with Mayo on May 13th.

“Yeah, although our focus is just on the League at the moment, you do always have one eye on that Championship game down in Castlebar,” he said.

“We’re just looking forward to it.”