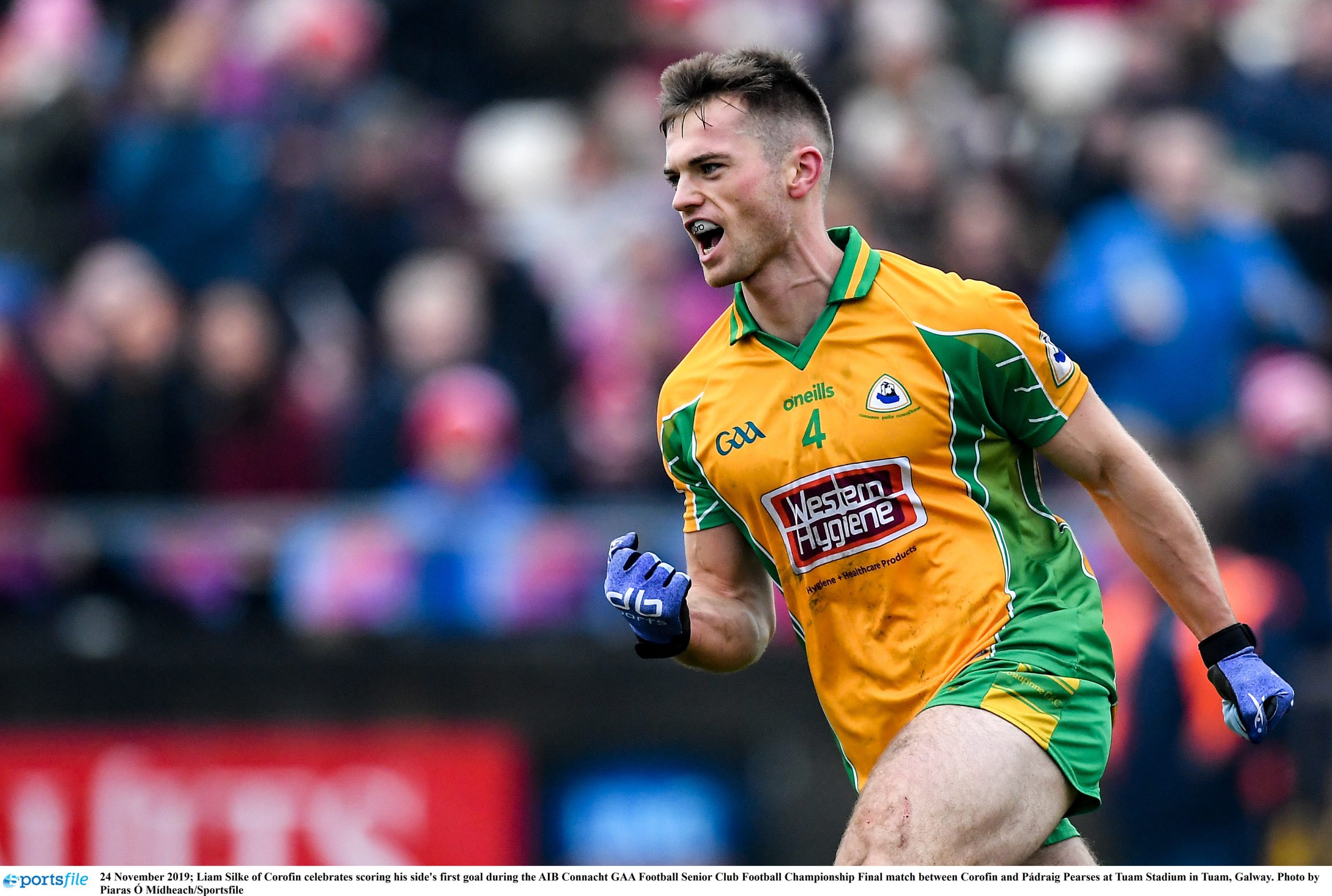 Corofin held off a strong challenge from Padraig Pearses in Tuam today to secure their fourth Connacht Senior Club title in a row and set up another tilt at an All-Ireland in January. The Galway side just had a bit too much nous and experience for their Roscommon counterparts and for the second game in a row they could count on a sucker punch goal from Liam Silke in the second half when the game was in the melting pot and could have gone either way. It was by no means a classic, the heavy underfoot conditions making things difficult for attacking play from the players.  Corofin are well accustomed to playing at this time of the year however and their superior game management and ability to control the pace and tempo of the game set the platform for this victory, their tenth provincial title overall.

The first half was extremely scrappy, with niggly fouling and persistent minor melees slowing down the game making for an ugly spectacle. Corofin dominated possession but found it very hard to breach the solid Pearses defence, struggling to manufacture space to get quality shots off. Emmet Kelly opened the scoring in the fifth minute with a sweet 45, drawing a huge roar from the travelling supporters who were savouring the occasion of their first ever Connacht Senior Final. Dylan Wall equalised a minute later with a fine score as the physical nature of both sides resulted in some heavy hits and plenty for Eamon O’Grady and his team of officials to be keeping an eye on. Michael Farragher read a long ball into the square perfectly before pointing from a tight angle in the 14th minute, giving Corifin a lead they would hold until the finish. In the 18th minute a blistering Corofin counter attack saw Jason Leonard put in on goal by clever play from Ian Burke, only for Niall Carty to take one for the team and cynically drag him to the ground for a black card. Sice scored the resulting free and added a second 5 minutes later to increase the gap to 3 after good patient play form the Galway kingpins. Corofin centre back Conor Cunningham then received a black card for his part in a melee in the 24th minute, as tempers again spilled over. Hubert Darcy pointed a simple free for Pearses before Jason Leonard answered straight back for Corofin on the stroke of half time, the teams heading for the dressing room with the score 5 points to 2 in favour of Corofin after a stop start 30 minutes of football.

Padraig Pearses shot out of the blocks in the second half and were level at 6 all by the tenth minute, with Hubert Darcy having a big influence after being switchedto a deeper role and Niall Daly covering every blade of grass. Paul Carey was also impressive in this period, kicking two fine scores. When Ronan Daly burst forward in the 40th minute to clip over a quality equaliser, the Pearses crowd sensed the upset was on as their team seemed to have all the momentum, all of a sudden hoovering up the breaks and winning their individual battles. However, almost exactly like the Semi Final against Ballintubber. Liam Silke popped up with the key goal midway through the second half to shock Corofin back to life and set them up for victory. Man of the Match Silke is brilliant at ghosting into dangerous positions untracked and that’s exactly what he did today again, getting on the end of a slick move between Jason Leonard and Ian Burke to blast past Whelan and give Corofin a precious three point lead. Indeed they nearly had another goal a minute later, but Daithi Burkes flicked effort came back off the bar after again being set up by Burke. Michael Farragher tidied up the move with a point off the rebound, and Corofin never looked back. There was very little football played in the closing stages of the match, with Corofin using all their experience to take the sting out of the contest and secure the win. Niall Daly, who was otherwise outstanding all game, received a second yellow card in the 27th minute as the Pearses’ challenge petered out, never really recovering from the hammer blow of Silke’s goal.  Corofin march onto the All Ireland Semi Final against the Munster Champions who will be either Nemo Rangers or Clonmel Commercials in January. Padraig Pearses fairytale season just fell short of Provincial honours, but 2019 will go down as the best in their history and they will look to kick on in 2020 and retain their County title and go one step further in Connacht.