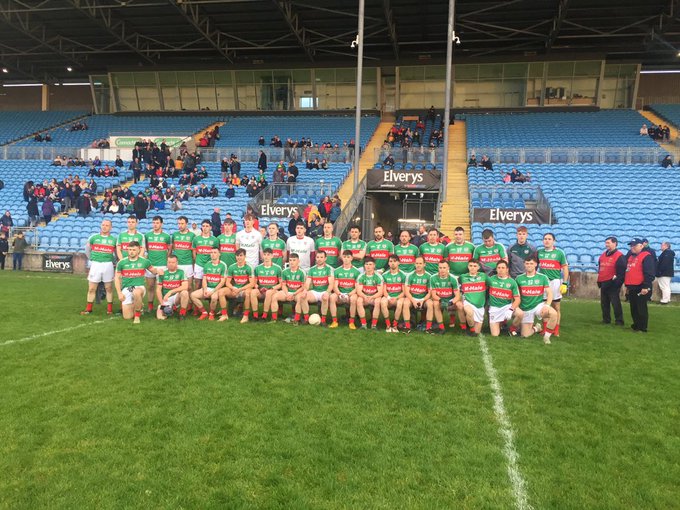 Kilmaine made light work of the dreadful conditions in Tuam today with a hard fought 4-8 to 2-11 win over Glenamaddy in the Connacht Junior Club Quarter Finals. They will continue on to play Ros champions Ballinameen next weekend in the semi final and on this performance packed with devastating speed and clinical finishing they will be very hard to stop.

The Mayo team had a dream start and were up and running after just 20 seconds when Cathal Murphy finished low under Cormac Haslam for a quality goal. A class point from the right wing by man of the match Jarleth Mullin was followed closely by three well struck points from Adam Barrett to give them a commanding 1-4 to nil lead after 10 minutes. Glenamaddy rallied and had the next three points on the trot, one through the trusty boot of McDara Geraghty and two from Padraig Geraghty, who battled hard all through. Oisin Mullen and Thomas Fahy both had stormers for Kilmaine, their blistering pace coming from deep often proving too hot to handle for Glenamaddy. Jarleth Mullin and Colin Hughes struck for well taken late second half goals to put the Mayo side 10-points up and realistically out of sight at half time, with Joey Maloneys brilliantly clever left footed effort on the whistle capping off a super first half performance.

Glenamaddy came out fighting after the restart and had three on the trot through a brace of frees from McDara Geraghty and a brilliant effort from Aidan Geraghty after resolute Kilmaine defending. Their gallop was halted however just as they were building momentum when classy centre forward Adam Barrett struck a hammer-blow of a goal after a long hopeful punt in the square caused confusion in the Glenamaddy defence. It was backs to the wall for Kilmaine for the remainder of the game with Adam Keady making 3 top class saves in this period, including a penalty save from McDara Geraghty. Conor Raftery goaled through a forest of bodies to give Glenamaddy renewed hope with ten to go, and when the same man scored another goal in injury time to reduce the gap to 3 a most unlikely comeback looked on. However, led by outstanding David Hughes and Gearoid O’Dea down the spine of the defence the Mayo men were able to hold out and continue their odyssey into the Provincial Championship against Ballinameen on the week of the 8th/9th of Nov.