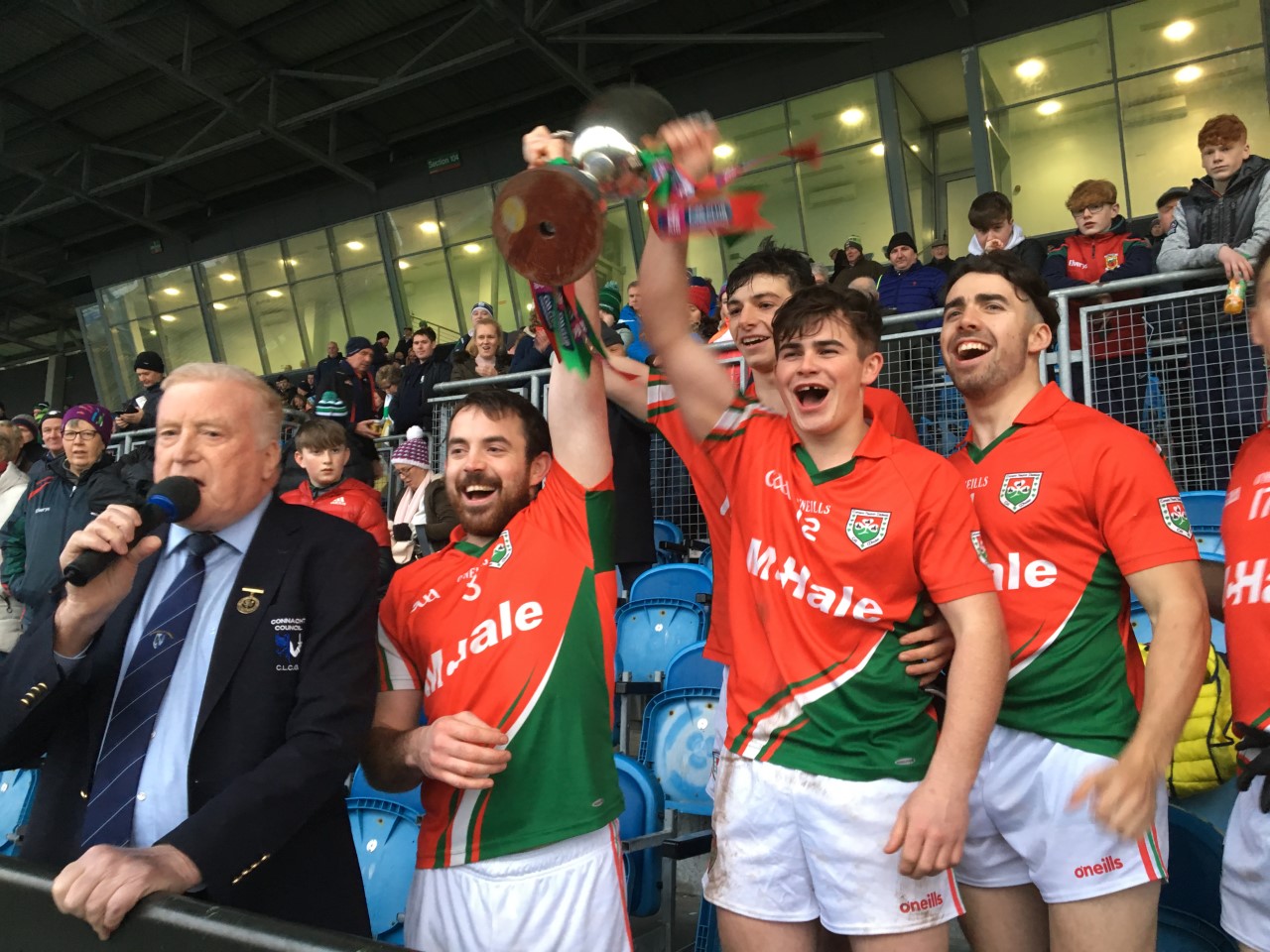 Kilmaine brushed past the challenge of Sligo Junior Champions St Michaels with ease today with a fantastic performance full of pace and power in perfect winter conditions in MacHale Park which saw them run out thirty point winners. The Sligo men could not live with Kilmaine who dominated completely from the first minute to the last, who will now advance to play the Munster Champions in January in the All Ireland Semi Final full of confidence.

Kilmaine showed their intent from the first seconds of the Final, as Thomas Fahey burst forward from the throw in, slicing through the heart of the defence and winning a free which Adam Barrett surprisingly missed. Jack Haran got injured in this altercation for St Michaels and had to be replaced, a big blow so early on for St Michaels. Jarlath Mullin opened the scoring in the 5th minute with a fine score from long range, as the Mayo men bossed the early exchanges without doing too much damage on the scoreboard. They were wasteful in front of the sticks and only had three points notched up by the 14th minute, when Dwayne Kelly the St Michael’s Centre Back had a moment he would prefer to forget. Already booked he crudely hacked down Cathal Murphy, earning himself a second yellow and making underdogs St Michaels difficult task impossible. Matt Keady and man of the match Oisin Mullin were imperious at midfield and Thomas Fahy popped up everywhere for the Mayo men, with Adam Barrett pulling the strings on the forty and Jarleth Mullin and Michael Hession a constant threat to the overworked St Michaels rearguard. Any time the Sligo champions did get a respite and mount an attack, veteran Pat Kelly was the extra man for Kilmaine and he hoovered up ball after ball in their defence to launch counter attacks. Hession got his goal in the 27th minute after a brilliant move by Kilmaine who were at this stage really enjoying themselves. Oisin Mullin fetched high and fed Thomas Fahey, who in turn hand-passed to Cathal Murphy who delayed his pass to Michael Hession until the perfect moment, allowing him to slot low past Kyle Crawley in goals. Kilmaine went in 1-10 to nil ahead, with the game well and truly over as a contest.

Kilmaine added 4-8 in the second period, with St Michaels getting off the mark in the 3rd minute through a Padraic McGoldrick free. The lightening fast Mullin brothers combined for Jarlath to goal in the ninth minute and the same player scored another a minute later, rounding the keeper after latching on to a dangerous long ball to leave the score 3-14 to 0-1 in the 40th minute of the game. Both clubs then then ran their benches, with the Kilmaine subs eager to catch the eye and press for a start in the All-Ireland Semi Final. One of these subs Brian Maloney palmed to the net for Kilmaines 4th goal in the 15th minute of the half after good work by Michael Hession, and Cathal Murphy raised a green flag of his own that all his hard work around the field deserved with ten minutes to go. The game was played out at walking pace as the hard work was done, Brian Taffee swinging over a beautiful point for St Michaels to give their fans something to cheer in the closing stages on what was otherwise a day that they’d rather move on quickly from after the tremendous achievement of winning the county Championship in October.