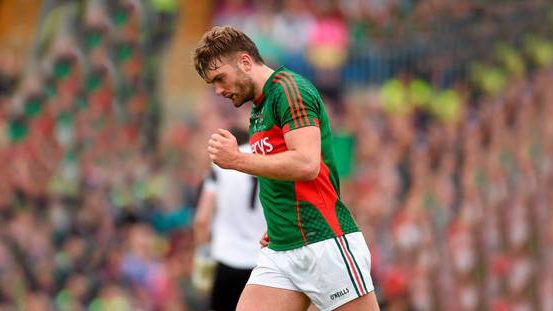 A goal from Jason Doherty 9 minutes into the second half provided Mayo with a cushion they never lost against a spirited Sligo team in Ballina on a day when awful weather caused a lot of games to be cancelled throughout Ireland. Mayo started 8 of the team which began their agonising All Ireland Final defeat to Dublin in September including 2017 player of the year Andy Moran.

Played in front of a good-sized ground it was Sligo who opened brightly despite playing against a strong breeze. However, some wayward shooting saw them trail 0-05 to 0-01 after 17 minutes with scores from Mayo forwards Diarmuid O’Connor, Jason Doherty and Evan Regan cancelling out Adrian Marren’s seventh minute opener. Defences were on top for both sides for the remainder of the half with only one more score popped over in the half from the boot of Sligo’s Stephen Coen in the 33rd minute. Indeed, this point seemed to spark Coen into action for the Yeats Men as he emerged in the second half to score five more points.

Sligo opened the second half with renewed vigour and the introduction of Compromise Rules star Niall Murphy saw them rattle off five points in succession to level the game seven points apiece. Mayo then reacted to this Sligo onslaught by scoring the crucial only goal of the game from Jason Doherty. A lofted free kick fell short of its target and after a goalmouth scramble the ball fell to the left boot of Doherty who slipped it to the Sligo net to provide Mayo with a three point lead. Aidan O’Shea, starting his first game of the season then added a point from play after good interplay amongst the Mayo forwards. From this point onward, it was score for score between the teams with Sligo unable to get into a position to score the goal they badly needed. Both teams should come away from this game in good spirits a week out from the commencement of the Allianz National League. Sligo will feel they have discovered a few new options capable of holding their own at this level and Mayo will feel the same and also be glad to have reintroducied some of their more recognisable faces for vital minutes before the games come thick and fast over the next number of weeks.