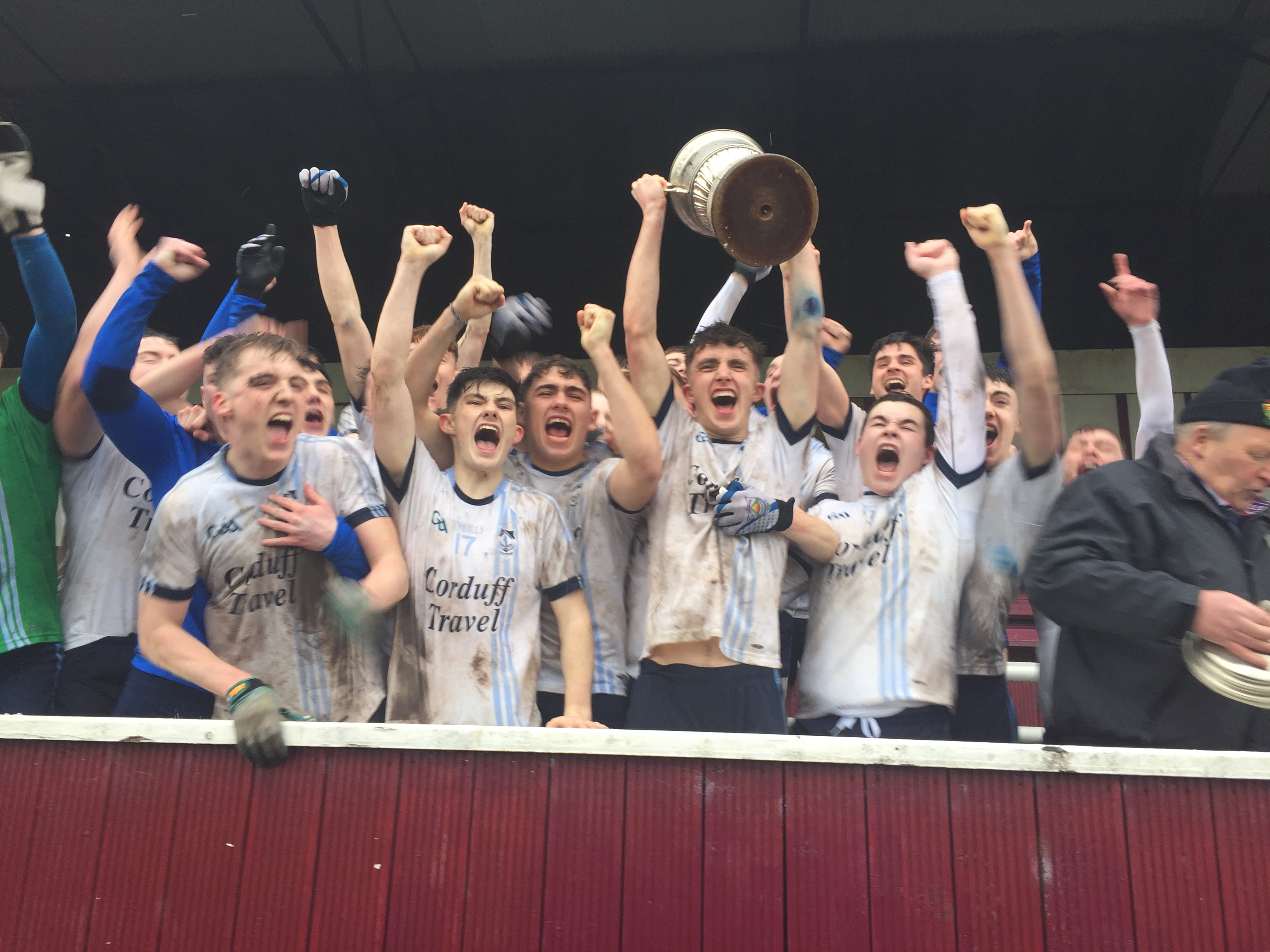 Rice College won the first ever Senior Colleges title in their history today, producing a gutsy, skilful team performance to condemn St Attracta’s to their third final loss in a row in the competition. This remarkable performance was made all the more impressive when you consider they lost their key midfielder Fintan McManamon after only 14 minutes of the first half to a straight red card.

The atmosphere was typical of a Connacht Schools Final, with flares being lit and chanting students providing tremendous colour which really added to the spectacle and sense of occasion.  In truth Rice College were the better team from start to finish, and they quickly burst into a four point to nil lead courtesy of some brilliant shooting from Keith Joyce, who ended up with 1-2, Pat Chambers and man of the match Stephen Loftus. St Attracta’s showed their mettle and rallied to drew level at 0-4 all after thirteen minutes, inspired as ever by the kicking of Red Óg Murphy and driven forward by wing back Liam Kerrigan, who had a fine game. Then came the sending off, and as so often happens, it was the team with the numerical disadvantage who seized the initiative immediately after. By half time Rice College had stretched their advantage out to 0-9 to 0-5, with centre forward Mark Moran and sharpshooting captain Pat Lambert excellent during this period, kicking two points each.

Rice goal keeper Cian Kennedy produced a brilliant save from point blank range at the beginning of the second half to deny Alan Reilly a goal as Attracta’s desperately sought a route back into the match. The teams then exchanged points as Rice were able to hold the Sligo men at arm’s length, who despite plenty of endeavour were unable to reduce the gap to a single score. Then came the crucial score of the match in the 46th minute when Keith Joyce reacted quickest to a dropping ball in the goal square to fist to the net and put his team seven up. Credit to St Attracta’s they continued to fight and they were thrown a lifeline with eight minutes to go when the were awarded a penalty, but Red Óg Murphy’s powerfully struck shot was well saved by Kennedy low to his right. Thing’s went from bad to worse for St Attracta’s in the closing stages when Red Óg Murphy and Niall Connolly were shown red cards for second yellows, but it mattered little as the result was already beyond doubt. Rice College captain Pat Lambert became the first man from his school to raise the Aonghus Murphy Cup aloft, sparking jubilant scenes from their supporters.

Rice College now move on to a semi final meeting with the Leinster Champions Naas CBS on the 24th of March, with a place in the Final of the Hogan Cup at stake for the winners on the 7th of April in Croke Park.