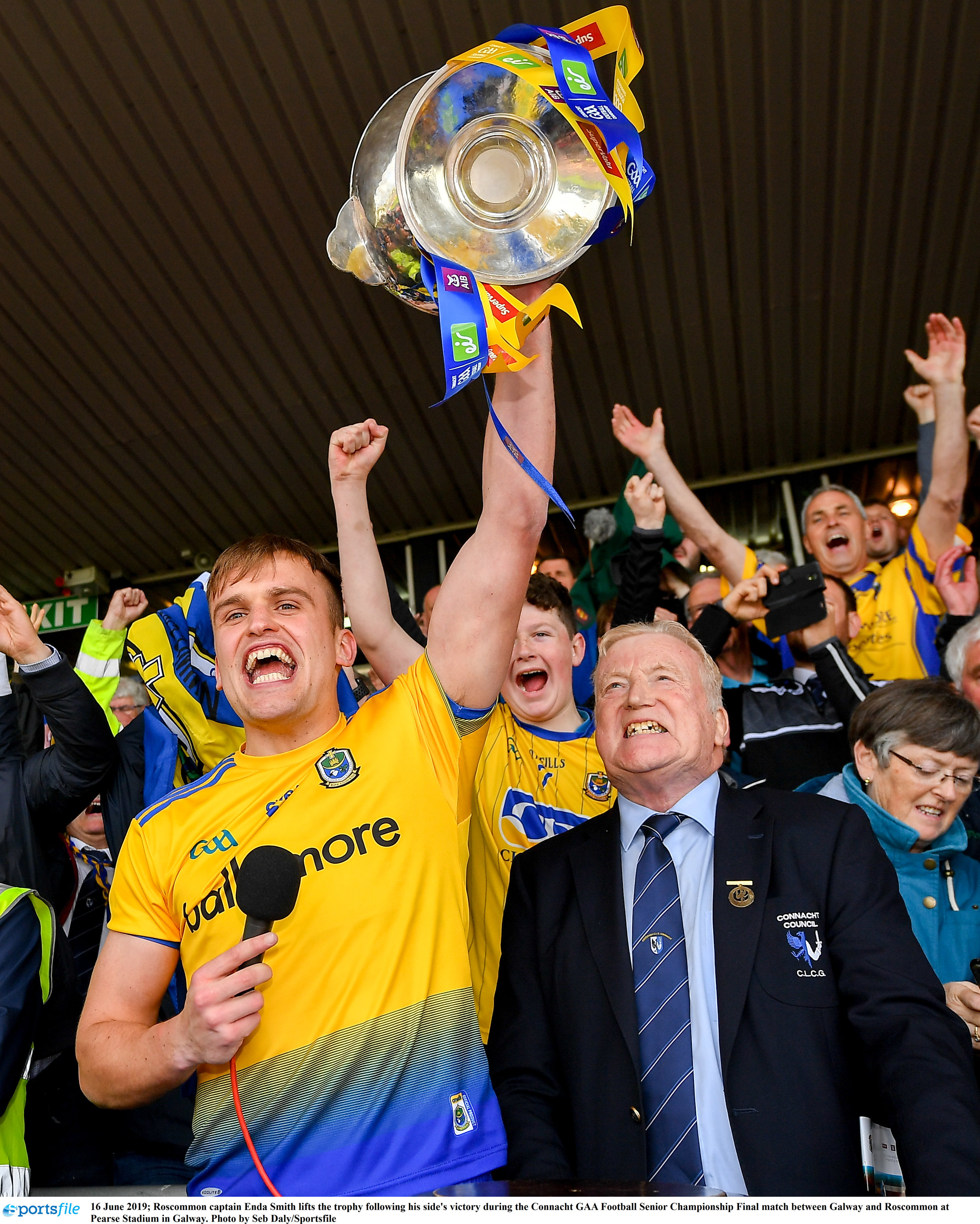 Roscommon claimed their 23rd Connacht Senior Football Championship today in Pearse Stadium after a powerful second half saw them defeat a disappointing Galway 1-13 to 0-12. The Tribesmen had a catastrophic collapse in the second half, only managing to score two points having held a commanding 0-10 to 0-5 lead at half time and looking set for certain victory. Diarmuid Murtagh’s goal early in the 41st minute was the key score of the game, not a bad time to score his first ever championship goal on a day that will live long in the memory for every Roscommon supporter.

It was an electric start to the game, with tremendous intensity from the first whistle. Enda Smith tipped down to Conor Devaney after 2 minutes for the opening score, after a nice pass from Conor Cox. Devaney started the game brilliantly, and his loss to injury after 18 minutes was a huge blow to Roscommon. Michael Daly opened Galways account a minute later, before Ronan Daly showed scorching speed to create the space to kick Roscommon back in front in the sixth minute. Antaine Ó Laoi and Shane Walsh were constantly dangerous at the other end, and they combined for 5 of the Tribesmen’s 10 first half points. The match was helter skelter in the first twenty minutes, with the play swinging from end to end at furious pace. Conor Cox and Diarmuid Murtagh kicked brilliant points from narrow angles for the Rossies, as their forward line looked dangerous whenever they attacked. Murtagh’s point levelled the teams at 20 minutes 5 each, and this was to be Roscommon’s final point of the half as Galway completely took over at midfield to kick on and score 5 points on the trot to go in 5 in front. This period of Galway dominance coincided with the heavens opening, as Tom Flynn, Garreth Bradshaw and sub Eamonn Brannigan all thundered into the game making light of the difficult conditions.

Whatever Anthony Cunningham said at half time did the trick for his team as they came out fired up and tore into Galway from the throw in. Within 6 minutes they had wiped out the Galway lead, after a super Niall Kilroy effort and the brilliant Conor Cox’s second left footed point of the game came either side of Murtaghs goal. Cathal Cregg deserves much of the credit for the perfectly timed hand pass he fed to Murtagh to assist the St Faithleachs man for the all important goal, expertly delaying the assist to draw the defender and give Murtagh the space he needed. A Murtagh free edged Roscommon infront for the first time since the 3rd minute of the game 5 minutes later, before Michael Daly equalised the game in the 21st minute with what incredibly was Galway’s only score from play of the half. Roscommon had the bit between the teeth however and looked the hungrier team. Niall Daly, a Murtagh free and Shane Killoran kicked huge points for them in the final quarter before Conor Cox finished the job with two class points in injury time. On to the Super 8’s now for the second year in a row for Roscommon in 4 weeks time, while Galway will have to get past one of the 4 teams that come through the qualifiers to get there.