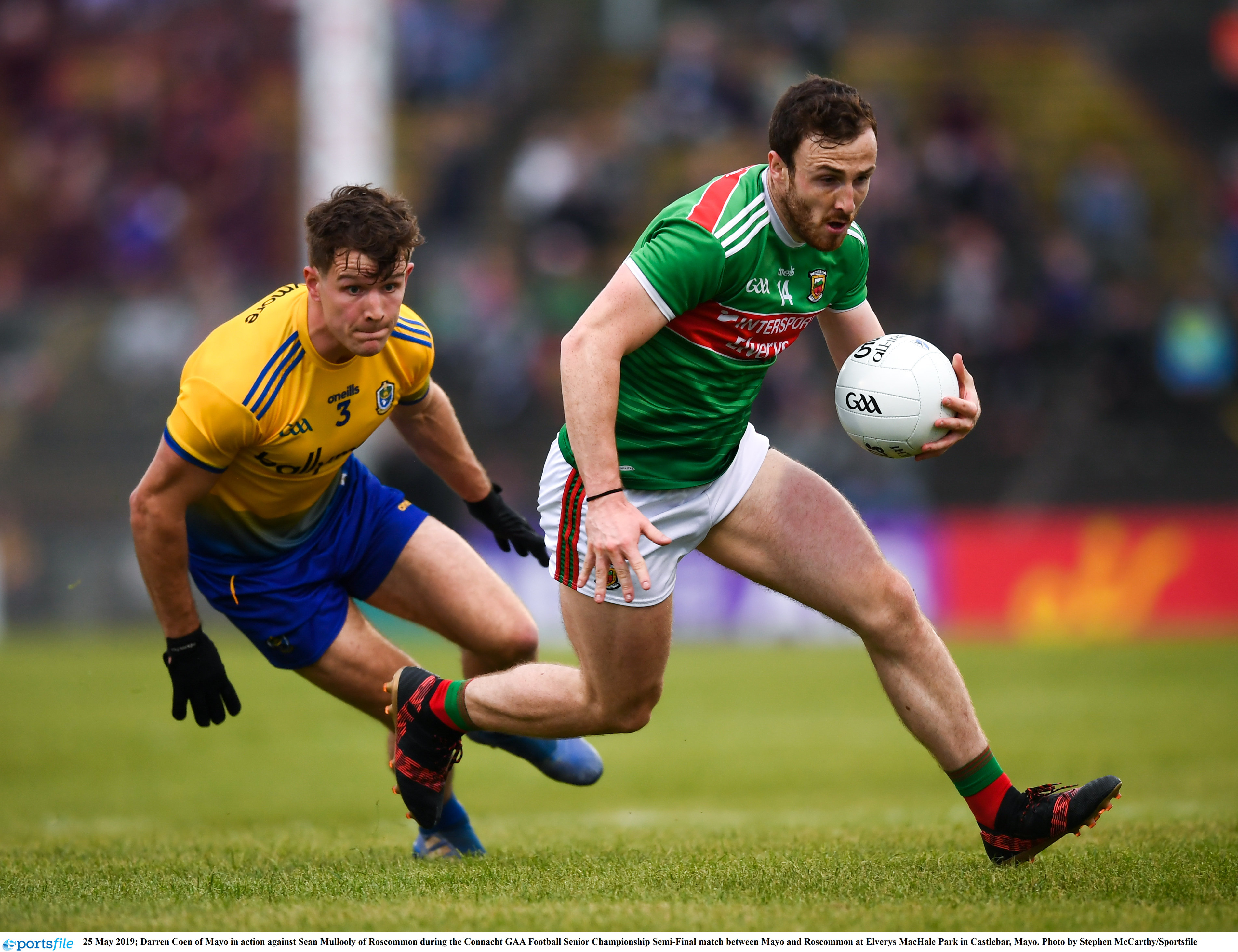 25 May 2019; Darren Coen of Mayo in action against Sean Mullooly of Roscommon during the Connacht GAA Football Senior Championship Semi-Final match between Mayo and Roscommon at Elverys MacHale Park in Castlebar, Mayo. Photo by Stephen McCarthy/Sportsfile

Substitute Fintan Cregg kicked the winner for Roscommon deep into injury time after a full blooded Connacht SFC Semi Final that was absorbing from the first minute until the last to send the Rossies to the Connacht Final. Jubilant primrose and blue supporters invaded the pitch on the final whistle of the most pulsating encounter of Championship 2019 to date, after Kevin McLoughlins kickable thirty metre free went wide on the near side with the last kick of the game. This was Championship  football at its brilliant best, and Roscommon just about deserved their win having led for most of the game, despite struggling to win kick outs throughout the game.

The first half was a rip roaring affair, with Mayo starting on top and causing Darren O’Malley plenty of problems with his kickouts by pushing all the way up at every opportunity forcing him to go long to the midfield, where Mayo held the advantage. The hits were huge from the first minute, with bone crunching tackles flying in constantly and frees very difficult to come by. Despite their dominance Mayo only led 0-2 nil through Ruane and Coen points after 10 minutes, with lots of wasteful shooting in this spell (they had 9 wides in the half and 15 overall). Cathal Cregg then showed Keith Higgins a clean pair of heels (something you don’t see too often) in front of the stand before slamming to the roof of the net for a brilliant goal, putting the Rossies a point up. A second Roscommon goal came five minutes later when Ultan Harney seized on hesitancy at the Mayo kick out, playing a one two with late inclusion Andy Glennon and palming to the empty net to give Roscommon a three point advantage, stunning the National League Champions and laying down a marker in the process. Conor Daly surged forward a minute later from corner back to receive a pass from his brother Ronan before kicking a brilliant point, and the Rossie fans smelled blood. The teams then traded points, with Darren Coen kicking three for the half and wing backs Durcan and Keegan popping up with their customary points, the pace and intensity of the battle never relenting. O’Malley showed brilliant poise to come forward and superbly strike two crucial long range frees into the wind to maintain Roscommons momentum in this period. Evan Regan was also threatening up front alongside Darren Coen, and he kicked a beauty from the left wing with half time approaching, before Matthew Ruane popped up with his second point just on the stroke of half time to leave the score 2-6 to 0-10 at half time. The tension spilled over at the whistle as players clashed going down the tunnel, resulting in Patrick Durcan, Lee Keegan, Niall Daly and Cathal Cregg receiving yellow cards.

Evan Regan and O’Malley swapped frees at the beginning of the second period, with the floodlights on as the drizzle began to fall steadily. Tellingly, O’Malley nailed 3 out of 4 of his long range frees over the course of the 70 minutes but his opposite number Robbie Hennelly failed to convert any of the three he came forward to kick. Conor Cox showed his metal in the second half, kicking four brilliant points under intense pressure from dead balls and frees. Sub Andy Moran and Paddy Durcan then kicked scores as Mayo levelled the game on 15 mins, with Mayo winning everything that broke in the middle of the field. Fergal Boland burst into life, his two points in a row nudging Mayo into the lead for the first time since Creggs early goal in the the 23rd minute after Enda Smith scored a massive captains score. Cox then levelled with a gutsy free from the corner with 5 to go after being fouled himself, punching the air as it sailed between the sticks.

The huge crowd of 20,500 couldn’t take their eyes off the action as the play ebbed and flowed, both teams fumbling possession as they threw everything at finding a precious winner. Fintan Cregg was the man who stepped up, keeping his calm to coolly stroke over a left footed point from 35 metres in the 38th minute, sending the travelling Roscommon fans wild. Mayo still managed to work a scoring opportunity after this, and Kevin McLoughlin will rue his missed opportunity as it was a kick he would have expected to get to force extra time.

Next up for Roscommon is the small matter of the Connacht Final against Galway in Salthill on 16th June, while National League Champions Mayo will have to reach the Super 8s the hard way via the qualifiers.