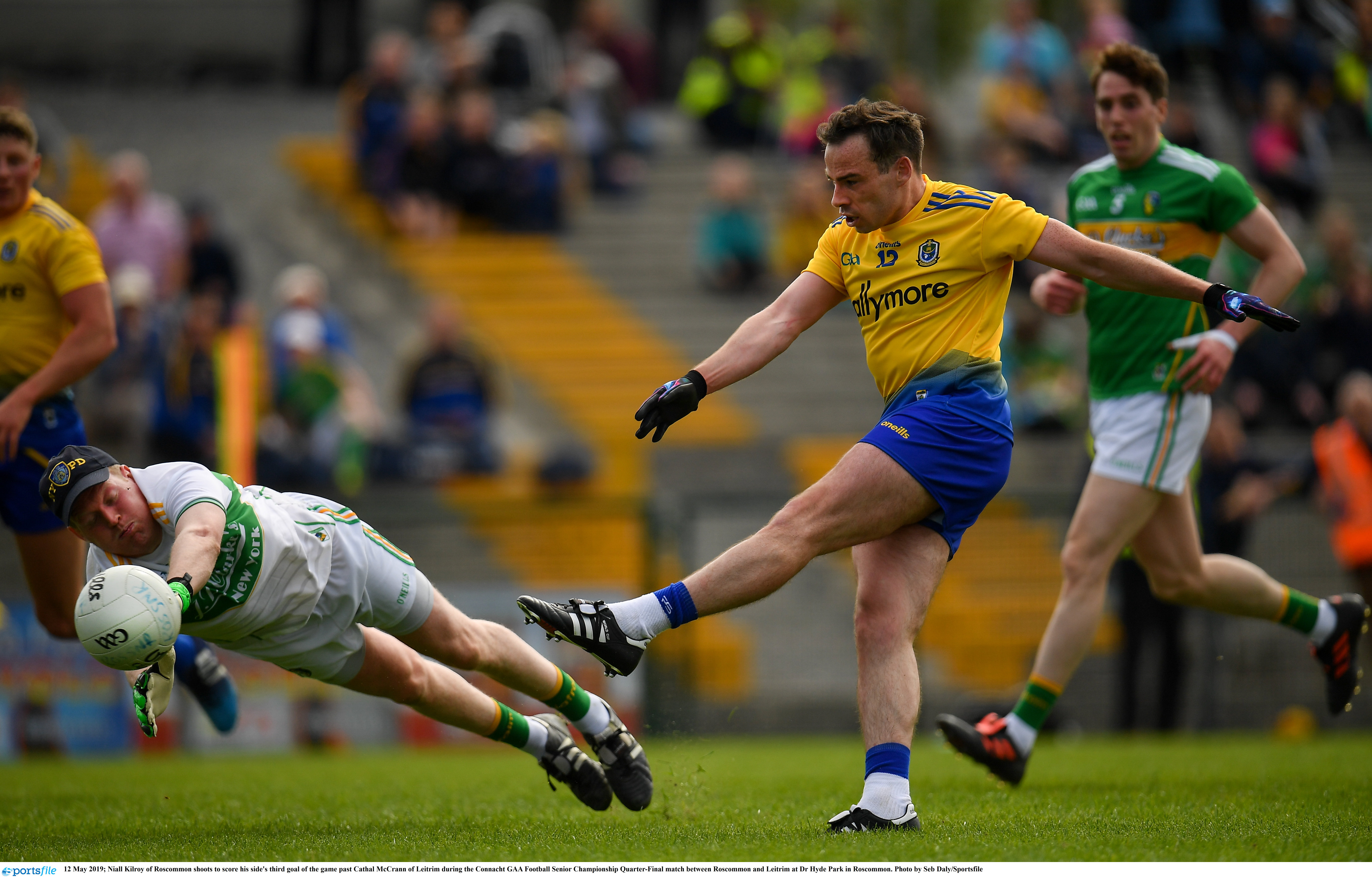 12 May 2019; Niall Kilroy of Roscommon shoots to score his side's third goal of the game past Cathal McCrann of Leitrim during the Connacht GAA Football Senior Championship Quarter-Final match between Roscommon and Leitrim at Dr Hyde Park in Roscommon. Photo by Seb Daly/Sportsfile

Roscommon enjoyed a comfortable win over Leitrim on a beautiful day in Dr Hyde Park today infront of a large crowd, easing to a 14 point victory in the Connacht Senior Football Championship Quarter Final. The gulf in class was starkly evident from the beginning, with Roscommon obviously sharper and fitter than their lower league opponents, running at them from deep and backboned by a teak tough defence..

The first half began in spectacular fashion, with Leitrim midfielder Shane Moran starting at the edge of the square and fielding a high ball in the first attack, before seeing his effort well saved by Darren O’Malley in the Roscommon goal. Terry Hyland sprung a surprise to many with the way his team lined out, with Moran inside in the full forward line and full back Fergal McTague playing at midfield. In truth it backfired, with McTagues man Shane Killoran doing serious damage, tearing through for two brilliant left footed goals before McTague was replaced by Dean McGovern in the twentieth minute. Roscommon were rampant, their superior power and conditioning allowing them to easily breakthrough the Leitrim tackles, creating overlaps. If they were more ruthless, they would have had at least three more goals in the first half. Conor Cox turned on the afterburners in the thirty third minute blowing a huge hole in the middle of the Leitrim defence, allowing him the space to slip to Niall Kilroy, who applied the killer blow with the minimum of fuss. Cox and Hubert Darcy both enjoyed fine championship debuts, Cox ending with 0-5 and Darcy fetching well around the middle and covering massive amounts of ground. Leitrim looked dangerous when they attacked themselves, Shane Moran proving a huge handful whenever he received any kind of service and Domhnaill Flynn and Ryan O’Rourke accurate with their shooting. The Rossies went in at the half time whistle with a 3-6 to 0-7, lead and were good value for it.

All the heavy lifting was done in the first half, but Anthony Cunningham will still be a bit disappointed by the way his team were so sluggish in the first 25 minutes of the second half, only managing 0-4 in this period. A bit of an injection from the bench saw a bit of renewed urgency, with the likes of Fintan Cregg, Andrew Glennon, Colin Compton and Cathal Heneghan all pushing for a start the next day. Leitrim will be disappointed in themselves as they never looked to have any chance of winning the game. They seemed strangely flat, and will need to rediscover their excellent league form if they are to go deep in the qualifiers in the second week of June. Roscommon’s focus now turns to Mayo for a mouth watering clash on the 26th May in MacHale Park. The only blemish for Roscommon was the sending off of corner back Conor Day to a straight red in the dying minutes.