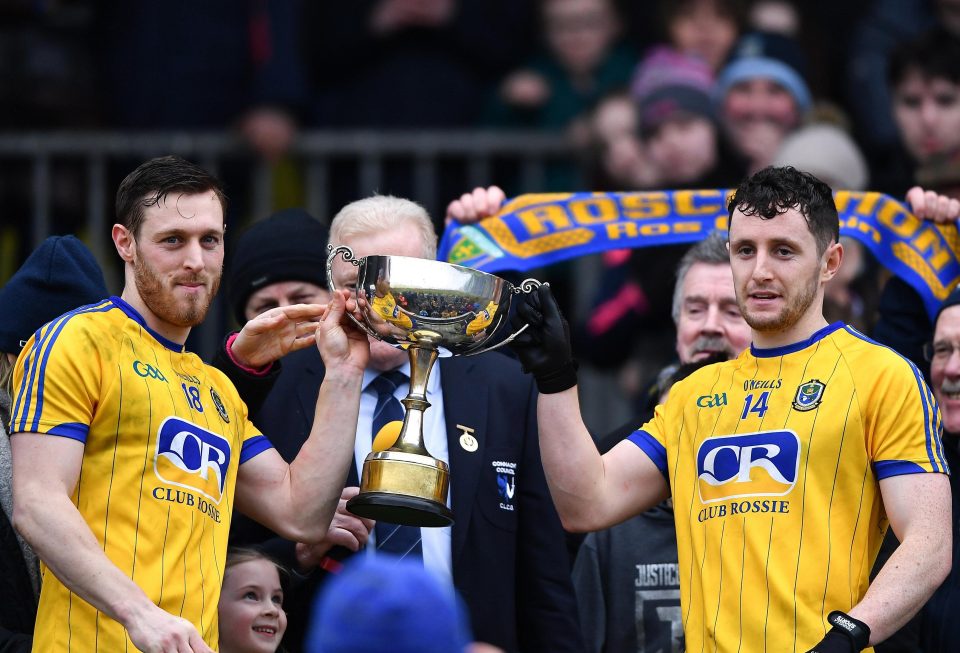 At a damp Hyde Park Roscommon got the better of old rivals Galway by a single point after a thrilling game which swung from end to end throughout and where the result was in doubt right up until the final seconds. Kevin McStay’s charges will be delighted to win their fourth ever FBD League after an enthralling game where both sides threw the shackles off and showed how dangerous their attacks can be.

Roscommon had a perfect start and led by four points to nil after 10 minutes. They showed their intent when Enda Smith fetched the throw in and fed his brother Donie with an inviting bouncing pass, who instinctively swung on to his left boot and pointed stylishly. A Ross Timothy effort marauding forward from centre back was sandwiched between two fine Cathal Cregg efforts, one off either foot, to put the Rossies in command. Galway responded well to the early Roscommon surge, and veteran Seán Armstrong got them off the mark with a lovely curling effort from the left wing, followed quickly by a Padraic Cunningham score from a narrow angle. Barry McHugh then opened his account with a free after a barnstorming run from midfielder Ciarán Duggan through the heart of the backline drew a foul. Disaster then struck in the Roscommon defence when goalie James Featherston’s attempted short kick out fell to Frankie Burke, who couldn’t believe his luck and calmly rolled the ball into the unguarded net. Roscommon immediately reacted to this setback through another Cathal Cregg point and a skyscraper Ciáráin Murtagh free.

Galway then struck for another goal after a deadly accurate Barry McHugh pass from midfield found Frankie Burke clean through and he made no mistake to raise his second green flag of the half, leaving Galway three in front despite Roscommon having played most of the football up to that point.  Rob Finnerty’s pointed free was then followed by a very well worked Roscommon goal. Enda Smith judged the bounce of the ball off the greasy surface better than the Galway defender and he kept calm to draw the goalkeeper before feeding man of the match Cathal Cregg who flicked to the net via the crossbar. This left the score 2-4 to 1-6 at the long whistle for the half time break with both sides evenly matched and the large crowd in attendance thoroughly enjoying the entertainment on offer.

Like the first half, Roscommon again started fast, a clever Cathal Cregg pass finding Ciaráin Murtagh in space inside the “D” and he duly pointed. Barry McHugh then added two more for Galway, including one huge kick from outside the 45-metre line. The scores were now coming thick and fast at both ends until two fine points from the Smith’s Enda then Donie gave Roscommon some daylight and a two point lead. Tom Flynn, who along with Duggan had an impressive game in the Galway engine room, then narrowed the gap with a long range score. Roscommon made a tactical switch in the second period and stationed Enda Smith on the edge of the square and this was beginning to pay dividends. He received a pass in the left corner in the 55th minute and used his physicality and power to shrug off a few tackles along the endline before deceiving Ó’Beoláin in the Galway goal to find the net from a tight angle to put his side in the driving seat. Barry McHugh slotted another free to narrow the gap before yet another dramatic moment saw the momentum shift dramatically back in Galway’s favour once more. Captain Gary O’Donnell pounced on a sloppy kick out to find Finnerty with a clever pass who quickly transferred to Dessie Conneely, who in turn goaled expertly along the ground from ten yards out to level the teams. Eoin Finnerty and Johnny Heany then rapidly pointed and it looked like the Tribesmen would continue their winning streak and make it eight wins out of eight for the season for them. However Roscommon weren’t finished yet and showed great character and composure to fire the last three points of the game through subs Niall Daly and Diarmuid Murtagh with two. Seán Armstrong had a late chance to force Extra Time but his long range free dropped well short with the last kick of the game. Both teams will be pleased with their performance and despite losing, Kevin Walsh will surely be pleased with the progress his team have made so far this season having collected three wins from three already in Division One of the Allianz League. Furthermore, a game of such excitement and quality so early in the season bodes well for a brilliant Connacht Championship later on in the year.