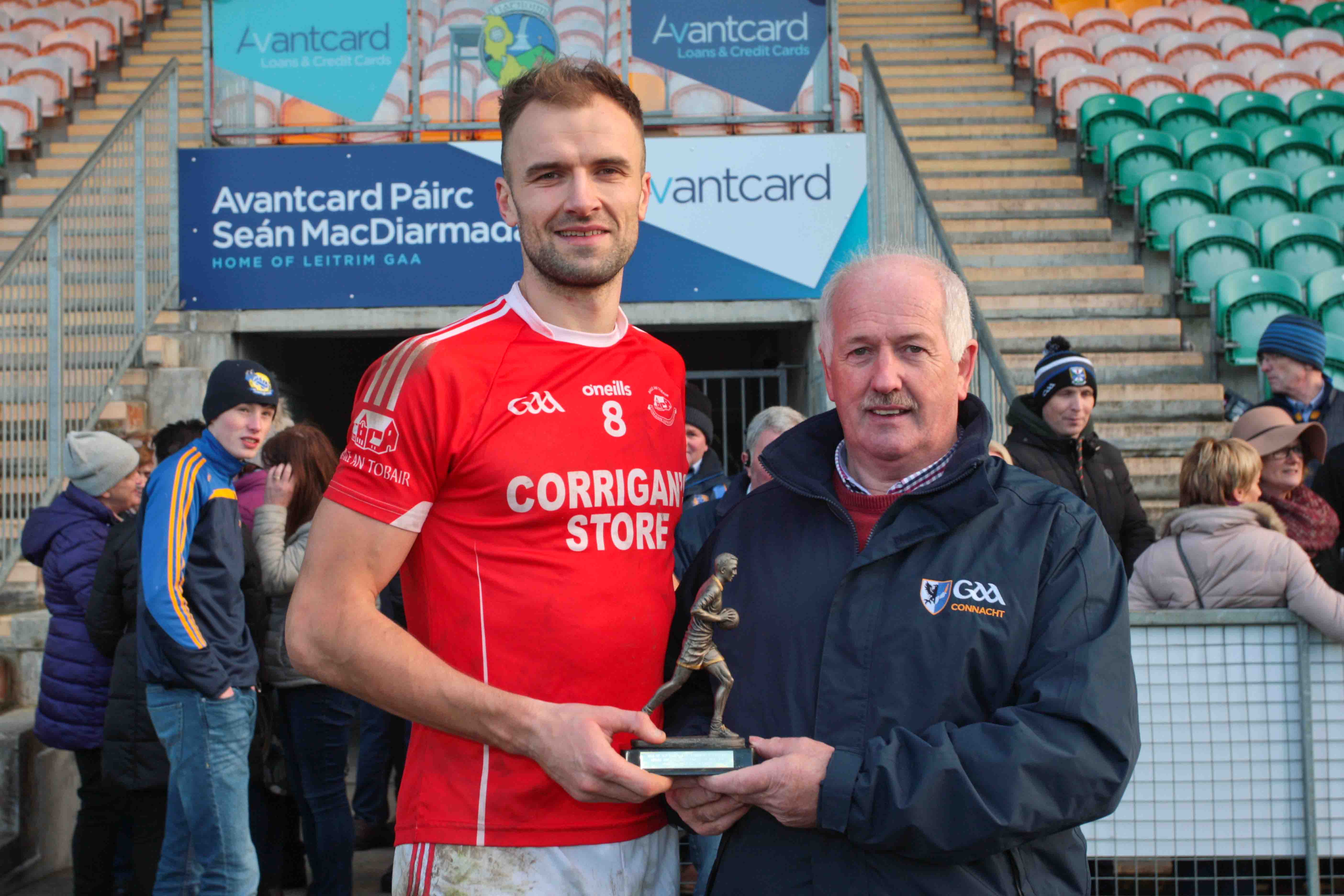 It will be a Mayo Galway Connacht Club Football Senior Final on the 25th of November as Corofin destroyed Clann na nGael 4-22 to 0-7 and Ballintubber struck for three second half goals to get past Aughawillan 3-11 to 1-9 in their semi final in Carrick.

Corofin were simply irresistable in the Hyde, with the interplay in their forward line and mean defence every bit as impressive as they were earlier on in the year when they became All Ireland Champions. Jason Leonard was the man of the match, helping himself to 2-6 but this was a total mismatch, certainly anyway when county star Ultan Harney  was red carded for Clann na nGael on the stroke of half time. Full match report and scorers can be found here https://connachtgaa.ie/news/corofin-far-strong-clann-connacht-semi-final/

Ballintubber faced a sterner challenge in Carrick-on-Shannon as Aughnawillan put it up to them for long stages, as the half time score of 0-8 to 0-5 would testify. Three second half goals however from Alan Plunkett and two from substitute Jamsie Finnerty broke the Leitrim mens resistance, for whom Gary Plunkett scored 5 points. Match report for that one courtesy of RTE here https://www.rte.ie/sport/gaa/2018/1111/1010177-ballintubber-final-corofin/

An Spidéal and Fuerty will contest the 2018 Intermediate Connacht Final after they came through their semi finals against Belmullet and Shamrock Gaels respectively. The Final will be played in a Galway venue, details TBC.

An Spidéal trailed Belmullet for long periods but showed unbelievable heart to claw the game back by kicking the final four points of the game to force extra time. They carried that momentum with them and were easily the better team in the extra time, outscoring the Mayo men 0-5 t 0-1. The Ó’Laoi’s, Antaine and Finnian, accounted for 0-11 of An Spidéal’s final tally. Full match report for this one can be read here https://connachtgaa.ie/news/spiddal-advance-past-belmullet-extra-time-battle/

Fuerty, who defeated Oran in the replayed Roscommon Final last weekend, capitalised on a powerful first half performance to join An Spidéal in the decider. 2-8 to 0-5 was the half time score in Coolooney, with Fuerty’s two goals coming from Eamon Bannon and Aongheus Lyons. To their credit, Shamrock Gaels came into it and really took the game to Fuerty in the early stages of second half, but it was too little too late for the Sligo men and Fuerty prevailed on a score of 2-12 to 0-6.

Easkey and An Fhairce, Clonbur will contest the Junior Final this Satuday in Enniscrone. Goals were the key for the Sligo champions Easkey as they scored three in the first half to see off Balla of Mayo in Enniscrone on Saturday, eventually prevailing 3-7 to 0-9 after leading 3-1 to 0-4 at the half time break. Kevin Duffy got two goals and a Ryan McKenna penalty in the opening moments to set Easkey on their way to a fantastic victory.

Kilglass Gaels led for long periods in the second semi final but in the end it was An Fhairce, Clonbur who finished  strongest to end up on the right side of the 1-12 to 0-12 scoreline in Tuam on Sunday. Trailing 0-9 to 0-5 having played against a strong first half wind, the Galway men produced a stirring second half fight back to reach the decider.

Tooreen upset the odds to beat St Gabriels of London on Saturday in a cracking contest, prevailing 0-18 to 1-13. It was a historic occasion in Ruislip as it marked the first time a club from London had competed in a provincial hurling competition and it was a tight exciting game the whole way through with the Mayo champions only leading by  0-9 to 1-5 at the break. Tooreen, for whom corner forward Seán Kenny was man of the match, now advance to take on the huge challenge of Galway Champions Oranmore/Maree on the 24th of November in Athleague.